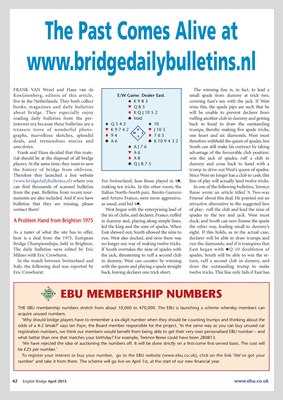 The Past Comes Alive at

FRANK VAN Wezel and Hans van de The winning line is, in fact, to lead a

live in the Netherlands. They both collect ´ K983 covering East’s ten with the jack. If West

books, magazines and daily bulletins ™ Q85 wins this, the spade pips are such that he

about bridge. They especially enjoy t K Q J 10 5 2 will be unable to prevent declarer from

anecdotes. ´ AJ76 South can still make his contract by taking

Frank and Hans decided that this mate- ™ A6 advantage of the favourable club position:

rial should be at the disposal of all bridge t A8 win the jack of spades, ruff a club in

players. At the same time, they want to save ® QJ875 dummy and cross back to hand with a

the history of bridge from oblivion. trump to drive out West’s queen of spades.

Therefore they launched a free website Since West no longer has a club to cash, this

(www.bridgedailybulletins.nl) where you For Switzerland, Jean Besse played in 4´, line of play will actually land twelve tricks.

can find thousands of scanned bulletins making ten tricks. In the other room, the In one of the following bulletins, Terence

from the past. Bulletins from recent tour- Italian North–South pair, Benito Garozzo Reese wrote an article titled ‘A Two-way

naments are also included. And if you have and Arturo Franco, were more aggressive, Finesse’ about this deal. He pointed out an

bulletins that they are missing, please as usual, and bid 6´. attractive alternative to the suggested line

contact them! West began with the enterprising lead of of play: ruff the club and lead the nine of

the six of clubs, and declarer, Franco, ruffed spades to the ten and jack. West must

A Problem Hand from Brighton 1975 in dummy and, playing along simple lines, duck, and South can now finesse the spade

led the king and the nine of spades. When the other way, leading small to dummy’s

As a taster of what the site has to offer, East showed out, South allowed the nine to eight. If this holds, as in the actual case,

here is a deal from the 1975, European run. West also ducked, and now there was declarer will be able to draw trumps and

Bridge Championships, held in Brighton. no longer any way of making twelve tricks. run the diamonds; and if it transpires that

Milnes with Eric Crowhurst. the jack, threatening to ruff a second club spades, South will be able to win the re-

In the match between Switzerland and in dummy, West can counter by winning turn, ruff a second club in dummy, and

Italy, the following deal was reported by with the queen and playing a spade straight draw the outstanding trump to make

Eric Crowhurst: back, leaving declarer one trick short. twelve tricks. This line only fails if East has

THE EBU membership numbers stretch from about 10,000 to 470,000. The EBU is launching a scheme whereby members can

odds of a 4-2 break?’ says Ian Payn, the Board member responsible for the project. ‘In the same way as you can buy unused car

registration numbers, we think our members would benefit from being able to get their very own personalised EBU number – and

what better than one that matches your birthday? For example, Terence Reese could have been 280813.

‘We have rejected the idea of auctioning the numbers off. It will be done strictly on a first-come first-served basis. The cost will

To register your interest or buy your number, go to the EBU website (www.ebu.co.uk), click on the link ‘We’ve got your

number’ and take it from there. The scheme will go live on April 1st, at the start of our new financial year.