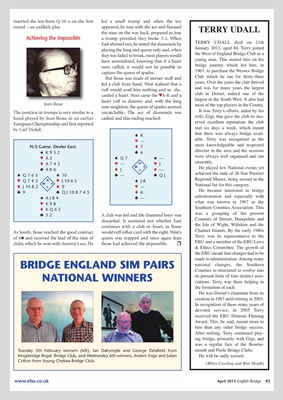 round – an unlikely play. appeared, he rose with the ace and finessed

the nine on the way back, prepared to lose Terry Udall

Achieving the Impossible a trump provided they broke 3-2. When

East showed out, he tested the diamonds by Terry Udall died on 11th

playing the king and queen only and, when January 2013, aged 84. Terry joined

they too failed to break, most players would the West of england Bridge Club as a

have surrendered, knowing that if a heart young man. This started him on his

were ruffed, it would not be possible to bridge journey which led him, in

capture the queen of spades. 1963, to purchase the Wessex Bridge

led a club from hand. West realised that a years. Over the years the club thrived

carded a heart. Next came the ™A-K and a club in dorset, indeed one of the

heart ruff in dummy and, with the king largest in the South West. It also had

Jean Besse most of the top players in the County.

The position in trumps is very similar to a uncatchable. The ace of diamonds was It was Terry’s efforts, aided by his

hand played by Jean Besse in an earlier cashed and this ending reached: wife, Gigi, that gave the club its des-

by Carl Dickel: met six days a week, which meant

´ K that there was always bridge avail-

™ — able. Terry was recognised as the

´ AJ84 ® — administration and especially with

discarded. It mattered not whether East Counties of dorset, Hampshire and

continues with a club or heart, as Besse the Isle of Wight, Wiltshire and the

As South, Besse reached the good contract would ruff either card with the eight. West’s Channel Islands. By the early 1980s

clubs, which he won with dummy’s ace. He Besse had achieved the impossible. r eBU and a member of the eBU laws

& ethics Committee. The growth of

the eBU meant that changes had to be

made to administration. among many

Counties re-structured to evolve into

ciations. Terry was there helping in

the formation of each.

He was dorset’s chairman from its

In recognition of these many years of

award. This, he said, meant more to

him than any other bridge success.

ing bridge, primarily with Gigi, and

was a regular face at the Bourne-