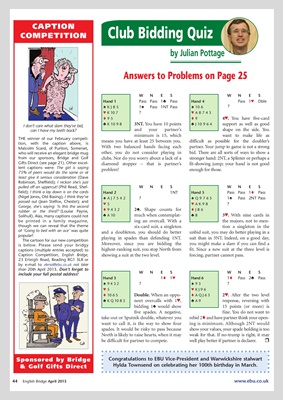 Answers to Problems on Page 25

can I have my teeth back? and your partner’s shape on the side. You

minimum is 15, which want to make life as

THE winner of our February competi-

tion, with the caption above, is

means you have at least 25 between you. difficult as possible for the doubler’s

Malcolm Scard, of Puriton, Somerset, With two balanced hands facing each partner. Your jump to game is not a strong

who will receive an elegant bridge mug other, you do not consider playing in bid. There are all sorts of ways to show a

from our sponsors, Bridge and Golf clubs. Nor do you worry about a lack of a stronger hand: 2NT, a Splinter or perhaps a

Gifts Direct (see page 21). Other excel- diamond stopper – that is partner’s fit-showing jump; your hand is not good

lent captions were: The girl is saying problem! enough for those.

least give it serious consideration (Dave

passed out (Jean Stelfox, Chester); and

George, she's saying: 'Is this the second

be printed in a family magazine, ing an overcall. With a the majors, not to men-

of ‘Going to bed with an ace’ was quite and a doubleton, you should do better unbid suit, you may do better playing in a

playing in spades than defending 1NT. suit than in 3NT. Indeed, on a good day,

is below. Please send your bridgy Moreover, since you are bidding the you might make a slam if you can find a

captions (multiple entries accepted) to highest-ranking suit, you stop North from fit. Since a new suit at the three level is

by e-mail to elena@ebu.co.uk not later

five spades. A negative, fine. You do not want to

take-out or Sputnik double, whatever you rebid 2t and have partner think your open-

want to call it, is the way to show four ing is min imum. Although 2NT would

spades. It would be risky to pass because show your values, your spade holding is too

North is likely to raise hearts, when it may weak for that. If no-trump is right, it may

be difficult for partner to compete. well play better if partner is declarer. r

Sponsored by Bridge Congratulations to EBU Vice-President and Warwickshire stalwart