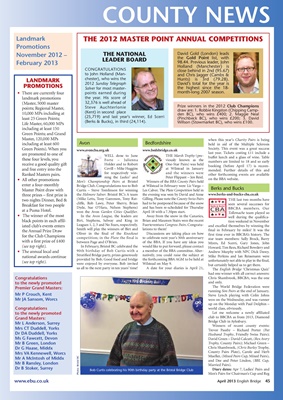 LANDMARK 2012 Sunday Telegraph David’s total for the year is

PROMOTIONS Salver for most master- the highest since the 18-

• There are currently four points earned during

the year. His score of

Green Points). When you www.avoncba.org.uk www.bedsbridge.co.uk Society. This event was a great success

are promoted to one of last year. Tickets costing £11 include a

WELL done to June THE Marsh Trophy (pre- buffet lunch and a glass of wine. Table

these four levels, you Forte – Julienna viously known as the numbers are limited to 18 and so early

and free entry into the Covill – Mike Huggins at Wilstead in January mended. Further details of this and

Ranked Masters pairs. for respectively win- and the winners were other forthcoming events are available

enter a four-monthly Bridge Club. Congratulations too to Bob at Wilstead in February were Liz Varga –

three prizes – first prize is the Helmore Salver. Bristol BC’s A team the evening was won by David and Anne www.berks-and-bucks-cba.co.uk

cliffe, Rob Lawy, Peter Sherry, Brian had to be postponed because of the snow seen several successes for

Breakfast for two people Dyde, Sue O’Hara, Nelson Stephens) and has been re-scheduled for Thursday BBCBA members. Our

at a Puma Hotel. won the Avon Garden Cities Qualifier. April 18 with a 7.30pm start. Tollemache team played so

• The winner of the most In the Avon League, the leaders are

Birt, Stephens, Selway and King in

Away from the snow in the Canaries,

well during the qualifica-

black points in each affil- tion weekend in November

iated club’s events enters Leagues 1, 2, 3 and No Fears, respectively. Fuerteventura Congress Pairs. Congratu- and excelled themselves by winning the

Smith will play the winners of Birt and lations to them! final in February by miles! It was the

for the Club Champions first time ever in BBCBA’s history. The

competition; in the Plate the final is to celebrate next year’s 50th anniversary star team members: Sally Brock, Barry

with a first prize of £400 between Page and O’Brien. of the BBA. If you have any ideas you Myers, Ed Scerri, Gary Jones, John

(see top right). In February, Bristol BC celebrated the would like to put forward, please contact Howard, Tim Rees, Richard Bowdery and

• The annual local and 90th birthday of Bob Curtis with a

a member of the BBA committee. Alter-

natively, you could raise the subject at

Mike Perkins and Ian Reissmann were

provided by Bob. Good food and bridge the forthcoming BBA AGM to be held at unfortunately not able to play in the final,

(see top right). were enjoyed by everyone. Bob invited Wilstead on May 9. but certainly helped us to get there.

us all to the next party in ten years’ time! A date for your diaries is April 21, The English Bridge ‘Christmas Quiz’

had one winner with all correct answers:

Congratulations Chris Shambrook, BBCBA, was the one

to the newly promoted and only.

running Sim Pairs at the end of January.

Mr JA Sansom, Worcs won on the Wednesday, and was runner

up on the Monday with Paul Dolphin –

to the newly promoted Let me welcome a newly affiliated

Grand Masters: club to BBCBA as from 2013, Diamond

Mr A McIntosh of Middx and Dee and Peter Lindon, (BBL Cup,