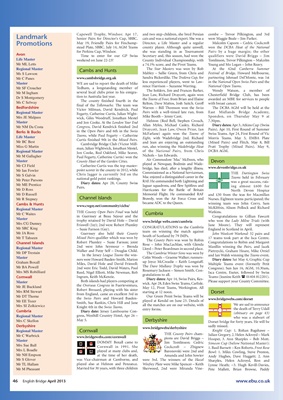 Landmark Senior Pairs for Director’s Cup, SBBC. cats and was a national expert. She was a were Maggie Beale – Jim Parker.

Promotions May 19, Friendly Pairs for Finchamp-

Director, a Life Master and a regular

county player. Although quite unwell,

won the DCBA Heat of the National

for Perkins Cup, Windsor. she was standing in as Tournament Pairs by a huge margin; the other

Avon Time to enter for our GP Swiss Secretary and, this season, had won the qualifiers were David Briggs – Jim

Master WE are sad to report the death of Mike less experienced players, went to Law- in the National Open Swiss Pairs and the

several local clubs prior to his emigra- The holders, Jim and Frances Barker, Wendy Watson, a member of

The county finished fourth in the the Teams of Four, from Brian and Elaine awarded an MBE for services to people

final of the Tollemache. The team was

Bedfordshire Victor Milman, David Kendrick, Paul Warren – Bill Thomson won the Swiss The DCBA AGM will be held at the

in the Open Pairs and 6th in the Swiss Draycott, Jean Law, Owen Prior, Ian Pairs). Apr 10, First Round of Summer

Mr BC Best and Jean are enjoying an outstanding (Mixed Pairs) and Flitch. May 8, Bill

bridge, has died, after a lengthy illness. www.devonbridge.co.uk

Mr Ian Fowler point scorer in the county in 2012, while

Chris Jagger is currently 3rd on the Commissioned as a National Serviceman, THE Dartington Swiss

Mr S Galvin Mac enjoyed a distinguished career in the

Mr Peter Parsons RAF. He commanded both Lightning and was a great success, rais-

Pairs. Jaguar squadrons, and flew Spitfires and ing almost £600 for

Mr D Russell Memorial Flight. He commanded RAF and £30 from the teas for Macmillan

in Guernsey at Beau Sejour and the Congratulations to Gillian Fawcett

Mr JA Ross team on winning the match against

South of Scotland by 79 IMPs.

The County Pairs was won by Robin

Mr DP Trestain The Cumbria Winter Sims was won by

In the Jersey League Teams the win- and Ian Walsh winning the Teams event.

Mr BA Powell The Dave Mullany Trophy was won by

Master Both islands had players competing at Please support your County Committee.

May 12, Pivot Teams, Workington. All

Robert Brouard, playing with his sister

from England, came an excellent 3rd in

Mr DT Thorne Our Green Point Swiss Teams will be

Mr EE Tozer played at Kendal on June 23. Details of

Smith, Sue Rankin, Chris Hill and Jane We are sad to announce

Mrs SI Zolkiewicz all the matches are on our website, with

Knight 4th in the Swiss Teams. the death of Terry Udall

Regional Master gress, Westhill Country Hotel, Apr 26 – who was a stalwart of

Mrs C Skellon May 5. Derbyshire Dorset bridge for forty years. He will be

Mr S Glover was Vice-chairman at Camborne, and were 3rd. The winners of the Hazel Sharples, Helen Ackroyd, Ron and