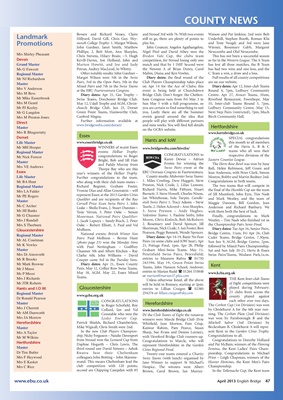 Bowen and Richard Vessey, Claire and Stroud 3rd with 76. With two events Watson and Pat Jenkins; 2nd were Bob

and Tony Voogd; and 3rd were Jane

Devon Kevill-Davies, Jon Holland, John and competition, for Stroud losing only one so far in the Western League. The A Team

Grand Master Marion Howitt, and Joe and Judy match and that by 1 IMP. Second were has lost all three matches, the B Team

Ms G Fawcett Petran, Audrey MacLeod, Jo Whitty. the Newent A of Brian Dorey, Carol has had two wins and one loss, and the

Mr NJ Richardson Margot Wilson were 5th in the Swiss Diary dates: the final round of the Full results of all county competitions

Pairs, 3rd in the Open Pairs, 5th in the Club Players Championship takes place are on our website.

Mixed Pairs and 7th in the Swiss Teams on Apr 14 for the Ace of Clubs; this Diary dates: Apr 12, Inter-club Teams

at the EBU Fuerteventura Congress. event is being held at Churchdown Round 4, 7pm, Ledbury Community

Mr PJ Keeley church Bridge Club. Jun 23, Dorset you are certain to find something to suit Ledbury Community Centre. May 13,

Mr G Langdon Green Point Teams, Hamworthy Club, you. Lastly there are all the Summer Next Step Pairs (restricted), 7pm, Much

www.bridgewebs.com/dorset/ and miss weeks. You will find full details

Life Master www.essexbridge.co.uk Hants and IoW this month to all members

Mr MH Hooper WINNERS of recent Essex www.bridgewebs.com/hiwcba/ of the Herts A, B & C

Regional Master events: Helliar Trophy: teams who all won their

congratulations to Roger CONGRATULATIONS to respective divisions of the

Master Fontes for winning the

Thorpe Bay who are this

Mr BA Hunt who along with their club team-mates – 1. Miles Cowling, Dave Huggett, Steve Congratulations to both teams.

Yvonne Dias and Allan Greenstein – will Richard Harris, Mike Fithyan, Stuart the final of the Humble Cup are the team

Qualifier and are recipients of the Ray and Mark Westley, and the team of

Mrs J Richards Unless otherwise listed, all the above THE Kent Inter-club Teams

Mr JTR Roberts will be held in Romsey, starting at 2pm; of Eight competitions were

Regional Master 254276 or lillian.craigen@sky.com 21 clubs from across the

CONGRATULATIONS each other over two days.

Mrs J Cherrett Collard, Ian and Val by Chislehurst A for the 6th year run-

Mr AM Dunworth Constable who won the ning. The Corbett Plate (2nd Division)

IN the Club Teams of Eight the runaway

Mrs JA Morrow Lesley Everett Cup. winners were Marcle Bridge Club (Evie was won by Farnborough B and the

Hertfordshire Daphne Hogarth – Chris Lewis. The and Pat McBain, winners of the Fleming

represent Herefordshire in the Garden