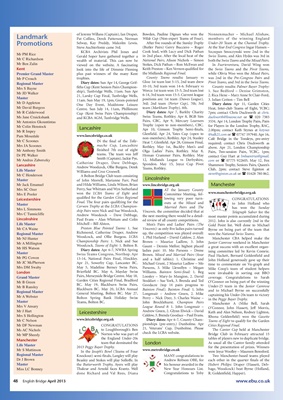 After five rounds of the Stanley Trophy

Under-20 Team at the Channel Trophy.

KCBA Archivists Phil Jones and Cook lead, with Lucy and Dick Pathan Szczepan Smoczynski were 2nd in the

Mr PM Rice in 2nd place. After the local heat of the Swiss Teams, and Alex Hydes was 3rd in

Gerald Soper have gathered together a

Mr C Richardson wealth of material. This can now be National Pairs, Alison Nichols – Simon both the Swiss Teams and the Mixed Pairs.

Kent look into the life of Dimmie Fleming Keith Preston – Ken Vernon qualified for the Swiss Teams and the Pivot Teams,

Premier Grand Master plus past winners of the many Kent the Midlands Regional Final. while Olivia Woo won the Mixed Pairs,

Mr P Crouch trophies. County Teams results: January vs was 2nd in the Pre-Congress Pairs and

Final. The four pairs qualifying for the outs at the Mixed and to John Holland who

Mrs L Simmons ship Pairs were Nick and Sue Woodcock, Vincents, the committee decided that at Telegraph Salver for the

Mrs C Tunnicliffe Andrew Woodcock – Dave Debbage, the next meeting there would be a detail- most master points accumulated during

Lincolnshire Paul Evans – Alan Whittam and Colin ed review of all county competitions. 2012. John is also currently 2nd in the

Mr CA Waine Preston Blue Pointed Teams: 1. Sue Vincents): as only five ladies pairs turned Byrne on being part of the team that

Mr PG Cowen 13-14, National Pairs Final, Hinckley. and a half tables): 1. Christine and John Holland generously gave up their

London Brierfield BC. May 6, Mayday Swiss Williams. Bainton Semi-final: 1. Reg were invaluable in sorting out BBO

BC. May 19, Blackburn Swiss Pairs, Goodacre (top 14 pairs progress to Under-25 team in the Junior Camrose

Blackburn BC. May 20, LCBA Annual Bainton Final). Bainton Final: 1. John and to Michael Byrne on successfully

Mr A Webster captaining his Under-20s team to victory

Norton who was part of check the LCBA website. Bridge Club in February attracted 15

2013 Peggy Bayer Trophy. for the presentation of prizes. Winners

Dr J Brown Beasley and Stokes will play Solloffe. In Andrew Robson OBE, for each other in the quarter finals of the