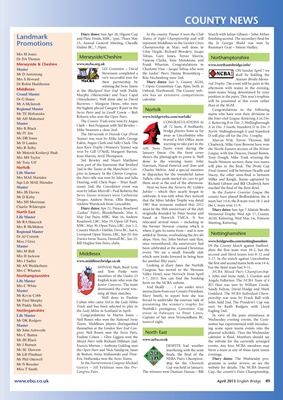 Landmark and Plate Finals, MBC, 1pm. Thurs May Teams of Eight Championship and will finishing second. The secondary final for

represent Middlesex in the Garden Cities

Championship in May; well done to

the St Georges Shield was won by

Mr D Armstrong Stevenson completed a the Ladies’ Pairs; Hanna Broomberg – shall be holding the

their partnership by Diary dates: Jun 3, County AGM, rial Trophy. The event will be pairs in the

winning the Swiss Teams 7.15pm; Committee Cup, 8pm, both at afternoon with teams in the evening,

Middlesex at the Blackpool Year End with Paddy Oshwal, Northwood. The County web- team-mates being determined by your

Grand Master Murphy (Merseyside) and Tracy Capal site has an extensive competitions position in the pairs. This year’s trophies

Dr G Haase (Manchester). Well done also to David calendar. will be presented at this event rather

Mr A McIntosh Burrows – Margaret Howe, who were than at the AGM.

Regional Master the highest placed Category B pair in the

Norfolk Congratulations to the following

Roberts who won the Open Pairs. www.bridgewebs.com/norfolk/ the Inter-club League: Kettering A in Div.

The County Trials were won by Angus CONGRATULATIONS to 1; Kettering B in Div. 2; Wellingborough

Mike Swanson a close 2nd. bridge players from as far North. Wellingborough A and Stamford

Mr JY Jim The Merseyside & Deeside Cup (Pivot away as Lincolnshire who D will play off for the Div. 3 trophy.

were part of the foursome that finished Harrison, Nawal Fenwick and Tom and will play in the final. The Broke Cup

Norfolk 2nd in the Teams at the Manchester Con- Charles Melvin. And a special mention Final (teams) will be between Headly and

Life Master gress in January. In the Chester Congress, in dispatches for the wonderful James Stacey, the other semi-final is between

Mrs MAE Harnden the Pairs title was won by John and Julia Tullett, who push-started six cars to get Miller and Keogh. Teams captained by

Sqn Ldr MAE Harnden Dearing, with Chris Pope – Peter Kauf- them away at the end of the afternoon. Richard Gibson and Bill Chadwick have

Master mann 2nd; the Consolation event was Next we have the Noverre BC Golden reached the final of the Betts Bowl.

Mrs JB Davies won by Julian Merrrill – Paul Roberts; the Jubilee – which they nearly forgot to In the Eastern Counties League the

Swiss Teams winners were Catherine celebrate. It was only when they noticed county have played Bedfordshire; the A

Draper, Andrew Petrie, Ollie Burgess, that the Silver Jubilee Trophy was dated team lost 14-6, the B team won 18-2 and

Life Master May Day Pairs, MBC. May 16, Andrew based at Norwich YMCA. It has AGM, Kettering. Wed May 1st, Fixtures

Regional Master County Match v Dublin, Deva BC. Jun 6, where it gets its name from – and is now

once remembered, the anniversary had

Master IN the County Match against Stafford-

been celebrated at the annual Christmas

event: ‘We are a small, friendly club

which now looks forward to being here

3-17. In the match against Lincolnshire

the first and second teams both won 14-6,

Valley Hotel, near Norwich from April

Northamptonshire members of the Under-25 1. John and Irene Auld, 2. Gordon and

instructions from our County President,

ning all their matches. Goddard. The NCBA Individual Cham-

Mr Kevin Cobb Mary Smith, to report how she was

Well done to Pauline pionship was won by Frank Ball with

Mr Fred Murphy forced to undertake the onerous task of

Cohen who came 3rd in the Lady Milne John Auld 2nd. The President’s Cup was

Nottingamshire the Lady Milne in Scotland in April. Eagling 2nd.

event in February to Peter Cotes,

Captain of her own Wymondham BC

Ms SC Dawson the Open Pairs and Nick Sandqvist, Janet interfering with the semi form a team at any of these open teams

Mr N Rossiter In the Fuerteventura Congress Michael ship for the Chronicle gramme is under review, so see the