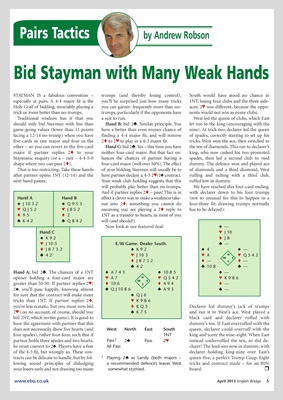 Bid Stayman with Many Weak Hands

STAYMAN IS a fabulous convention – trumps (and thereby losing control), South would have stood no chance in

especially at pairs. A 4-4 major fit is the you’ll be surprised just how many tricks 1NT, losing four clubs and the three side-

Holy Grail of bidding, invariably playing a you can garner: frequently more than no- aces; 2™ was different, because the oppo-

trick or more better than no-trumps. trumps, particularly if the opponents have nents would not win as many clubs.

Traditional wisdom has it that you a suit to run. West led the queen of clubs, which East

should only bid Stayman with less than Hand B: bid 2®. Similar principle. You let run to the king (encouraging with the

game-going values (fewer than 11 points have a better than even money chance of nine). At trick two declarer led the queen

facing a 12-14 no-trump) when you have finding a 4-4 major fit, and will remove of spades, correctly starting to set up his

five cards in one major and four in the 2t to 2™ to play in a 4-3 major fit. tricks. West won the ace, then switched to

other – so you can revert to the five-card Hand C: bid 2®. Yes – this time you have the ten of diamonds. This ran to declarer’s

major if partner replies 2t to your neither four-card major. But that fact en- king, who now cashed his two promoted

Staymanic enquiry (or a – rare – 4-4-5-0 hances the chances of partner having a spades, then led a second club to void

shape where you can pass 2t). four-card major (well over 50%). The effect dummy. The defence won and played ace

That is too restricting. Take these hands of your bidding Stayman will usually be to of diamonds and a third diamond, West

next hand passes: Your weak club holding suggests that this ruffed low in dummy.

will probably play better than no-trumps. We have reached this four-card ending,

And if partner replies 2t – pass! This is in with declarer down to his four trumps

Now look at our featured deal: ´ —

for sure that the contract will make more ´ QJ6

bid 2NT, which invites game). It is good to black card and declarer ruffed with

have the agreement with partner that this dummy’s ten. If East overruffed with the

does not necessarily show five hearts (and West North East South queen, declarer could overruff with the

four spades), rather four-four, such that if 1NT king and score the nine-eight. When East

partner holds three spades and two hearts, Pass1 2® Pass 2™ instead underruffed the ten, so did de-

he must convert to 2´. Players have a fear All Pass clarer! The lead was now in dummy, with

of the 4-3 fit, but wrongly so. These con- declarer holding king-nine over East’s

tracts can be delicate to handle, but by fol- 1 Playing 2® as Landy (both majors – queen-five, a perfect Trump Coup. Eight

your losers early and not drawing too many somewhat stymied. board. r