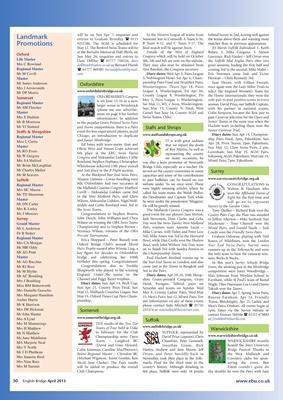 will be on Sun Apr 7; enquiries and In the Western League all teams from behind Surrey in 2nd, scoring well against

Landmark entries to Graham Brindley ( 0115 Somerset lost to Cornwall: A Team 4-16, the teams above them and winning more

May 12. The Retford Swiss Teams will be

final match will be against Avon.

matches than in previous appearances.

at the Barnaby Memorial Hall, Blyth, on Details of the West of England Belsey, 2. Mike Gargano, 3. Simon

Sun May 26; enquiries and entries to Congress which will be held on October Lawrence. Rick Hanley – Jeff Orton won

Mrs C Rowland dobbieuk@yahoo.co.uk or Bernard Plumb They may also may be obtained from great sessions, leading the first half and

OXFORDSHIRE’S Congress County League 9, Woolavington. Fri the Home Internationals; they were the

Somerset May 3, Pairs League 5, Woolavington. only pair to post positive scores in every

Mr TJ Stuttard and Teams competitions, there is a Pairs Hackett team including them won the

Miss L Curtis IT is with great sadness

Master that we report the death

Mr RO Evers of Roy Martin. As well as

on many occasions, he

Mr Charles Mellor and 2nd place in the B Flight section. served on the county committee in many Surrey

Mr M Seavers At the Blackpool Year End Swiss Pairs, capacities and some of his contributions

Suffolk Alastair Gidman – Lorna Swadling were to past bulletins can be found on our www.surreycountybridge.org.uk

Regional Master 8th. Oxfordshire had two successes at website under ‘As we once were’. These CONGRATULATIONS to

the Midlands Counties Congress: Matthew were highly amusing articles, where he Walton & Hersham who

Mr TD Shearman in the West Midland Pairs, and Chris the Headmaster and Captain Turf, while Eight for the first time and

Master Wilson, Aleksandar Lishkov, Nigel Wolf- he went under the pseudonym ‘Muggins’. will go on to represent

Mr DN Carter endale and Cathy Rowland were 3rd in He will be greatly missed. Surrey in the Garden Cities.

Mr MR Oddy Pairs Trophy named after Winnie Ling, a on to finish 3rd with Sandra Fenton in runners-up in the Tollemache and were

Mr AG Pratt key figure for decades in Oxfordshire the Championship Teams. the only team to beat the runaway win-

Mr RJ Bass Congratulations also to Freddie came 2nd in the Teams in Bangkok and Event, the winning pair in the Minibridge

Mr M Blythe Illingworth who played in the winning 3rd in the Pairs. competition were Jonty Woodbridge –

Amber Harris pionship. any information on any of these events Teams, Bletchingley. Apr 21, Ladies’ and

Mrs JM Hickman Somerset 235374 or mitchellmj@btinternet.com 1pm. Enter via the Surrey website or

Mrs M Mannerings THE results of the Two Tier

Mr N Matthew in February for the Club SUFFOLK, represented by

Mr J D Phethean Below Regional Master – Clevedon BC Orton, and Peter Sutcliffe back in the West Midlands and

Mrs M Samani will be added to produce the overall county’s history. Although finishing in Fitton couldn’t quite do

Club Champions. 6th place, Suffolk were only 18 points the double: he won the Pairs with Sam