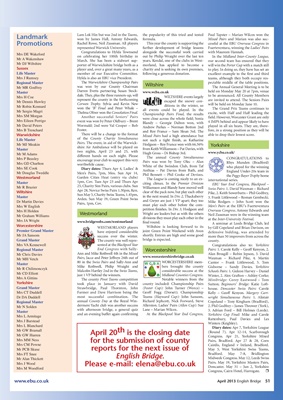 Lam Lok Hin but was 2nd in the Teams, the popularity of this tried and tested Paul Tapster – Marian Wilcox won the

This year the county is supporting the

cessful at the EBU Overseas Congress in

Congratulations to Hylda Townsend alongside the successful work carried with Maureen Hannah.

on celebrating her 100th birthday in out by Philip Wraight over the last ten In the Midland Inter-County League,

Mr A Wakenshaw March. She has been a stalwart sup- years. Kendal, one of the clubs in West- our second team has ensured that they

Mr DJ Wiltshire porter of Warwickshire bridge both as a morland, has applied to become a will win the Porter Cup with a match still

Sussex player and, over a great many years, as a charity and is seeking its own premises, to play. In doing so, they have has set an

Life Master member of our Executive Committee. following a generous donation. excellent example to the first and third

Mrs J Rumsey Hylda is also an EBU vice President. teams, although they both occupy res-

Mrs H Coe dale. They, plus the three runners-up, will WILTSHIRE events largely to be announced. All County Members

represent the county in the forthcoming escaped the snowy con- are invited to attend. The Seniors Pairs

Corwen Trophy. Sylvia and Kevin New ditions in the winter, so will be held on Monday June 10.

Mr Robin Kennard won the ‘B’ Final and Peter Whale – all events could be played. In the The Grand Prix Teams continues to

Mr Sergio Magri Thelma Oliver won the Consolation Final. excite, with Half and Half leading the

Another successful Seniors’ Pairs were close across the whole field; Sonia field. However, Worcester Grant are only

Mrs B Trenchard Foster. and Roy France – Sam Sloan 3rd. The fore, in a strong position as they will be

Warwickshire There will be a change to the format Mixed Pairs had a high attendance but able to drop their lowest score.

Life Master of the County Charity Simultaneous not such a tight finish, as Katharine

Mr MJ Meakin Pairs. The event, in aid of the Warwick- Hodgson – Roy France won with 66.36%

shire Air Ambulance will be played on Yorkshire

White of the Swindon Club, from Taf who played for the winning

Westmorland The League is coming nicely to an ex-

Wiltshire clear of the pack now, but play each other Pike, 2. Keith Sowerbutts – Phil Godfrey,

Arden. Sun May 19, Green Point Swiss and Gwyer are just 1 VP apart; they too

divisions they must play each other in the at the Inter-University Festival.

Worcestershire WESTMORLAND players Wiltshire is looking forward to its by Gill Copeland and Brian Davison, on

Mr JA Sansom success over the winter. shortly. Entries are high and some good more than 50 improvers from across the

80 in the Swiss Pairs and Sally-Ann and WORCESTERSHIRE mem- Cantor – Frank Littlewood, 5. Tom

Mr PCB Skuse reports for the next issue of May 5, West Yorkshire Swiss Teams,