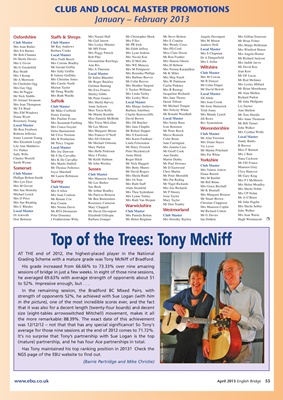 Top of the Trees: Tony McNiff

AT THE end of 2012, the highest-placed player in the National

Grading Scheme with a mature grade was Tony McNiff of Bradford.

sessions of bridge in just a few weeks. In eight of those nine sessions,

he averaged 69.63% with average strength of opponents about 51

In the remaining session, the Bradford BC Mixed Pairs, with

strength of opponents 52%, he achieved with Sue Logan (with him

in the picture), one of the most incredible scores ever, and the fact

the more remarkable: 88.39%. The exact date of this achievement

Has Tony maintained his top ranking position in 2013? Check the

NGS page of the EBU website to find out.