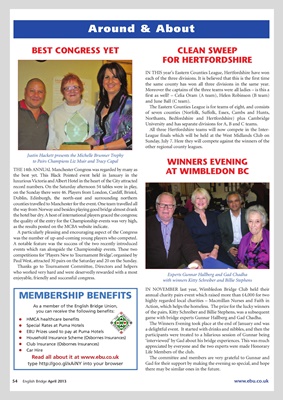 IN THIS year’s Eastern Counties League, Hertfordshire have won

each of the three divisions. It is believed that this is the first time

the same county has won all three divisions in the same year.

The Eastern Counties League is for teams of eight, and consists

Northants, Bedfordshire and Hertfordshire) plus Cambridge

University and has separate divisions for A, B and C teams.

All three Hertfordshire teams will now compete in the Inter-

Sunday, July 7. Here they will compete against the winners of the

THE 14th ANNUAL Manchester Congress was regarded by many as

the best yet. This Black Pointed event held in January in the

record numbers. On the Saturday afternoon 54 tables were in play,

on the Sunday there were 46. Players from London, Cardiff, Bristol,

counties travelled to Manchester for the event. One team travelled all

the way from Norway and besides playing good bridge almost drank

the hotel bar dry. A host of international players graced the congress;

the quality of the entry for the Championship events was very high,

as the results posted on the MCBA website indicate.

A particularly pleasing and encouraging aspect of the Congress

was the number of up-and-coming young players who competed.

A notable feature was the success of the two recently introduced

events which ran alongside the Championship events. These two

competitions for ‘Players New to Tournament Bridge’, organised by

Paul West, attracted 30 pairs on the Saturday and 20 on the Sunday.

Thanks go to Tournament Committee, Directors and helpers

who worked very hard and were deservedly rewarded with a most

As a member of the English Bridge Union, Action, which helps the homeless. The prize for the lucky winners

you can receive the following benefits: of the pairs, Kitty Schreiber and Billie Stephens, was a subsequent

a delightful event. It started with drinks and nibbles, and then the

participants were treated to a hilarious session of Gunnar being

‘interviewed’ by Gad about his bridge experiences. This was much

appreciated by everyone and the two experts were made Honorary

Read all about it at www.ebu.co.uk The committee and members are very grateful to Gunnar and

type http://goo.gl/xAiNY into your browser Gad for their support by making the evening so special, and hope

there may be similar ones in the future.