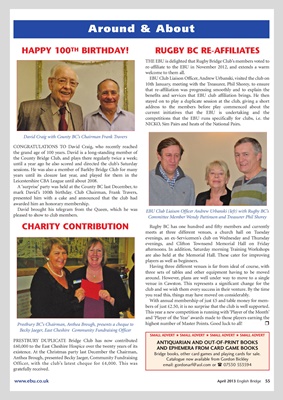 re-affiliate to the EBU in November 2012, and extends a warm

welcome to them all.

10th January, meeting with the Treasurer, Phil Shorey, to ensure

that re-affiliation was progressing smoothly and to explain the

benefits and services that EBU club affiliation brings. He then

stayed on to play a duplicate session at the club, giving a short

address to the members before play commenced about the

current initiatives that the EBU is undertaking and the

competitions that the EBU runs specifically for clubs, i.e. the

NICKO, Sim Pairs and heats of the National Pairs.

the grand age of 100 years. David is a long-standing member of

the County Bridge Club, and plays there regularly twice a week;

sessions. He was also a member of Barkby Bridge Club for many

years until its closure last year, and played for them in the

Leicestershire CBA League until about 2008.

A ‘surprise’ party was held at the County BC last December, to

presented him with a cake and announced that the club had

awarded him an honorary membership.

David brought his telegram from the Queen, which he was EBU Club Liaison Officer Andrew Urbanski (left) with Rugby BC’s

meets at three different venues, a church hall on Tuesday

evenings, an ex-Servicemen’s club on Wednesday and Thursday

are also held at the Memorial Hall. These cater for improving

players as well as beginners.

Having three different venues is far from ideal of course, with

three sets of tables and other equipment having to be moved

around. However, plans are well under way to move to a single

venue in Cawston. This represents a significant change for the

club and we wish them every success in their venture. By the time

you read this, things may have moved on considerably.

With annual membership of just £5 and table money for mem-

bers of just £2.50, it is no surprise that the club is well supported.

£60,000 to the East Cheshire Hospice over the twenty years of its AND EPHEMERA FROM CARD GAME BOOKS

existence. At the Christmas party last December the Chairman, Bridge books, other card games and playing cards for sale.