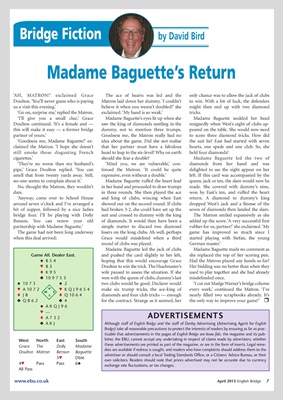 ‘AH, MATRON!’ exclaimed Grace The ace of hearts was led and the only chance was to allow the jack of clubs

Doulton. ‘You’ll never guess who is paying Matron laid down her dummy. ‘I couldn’t to win. With a bit of luck, the defenders

us a visit this evening.’ believe it when you weren’t doubled!’ she might then end up with two diamond

‘Go on, surprise me,’ replied the Matron. exclaimed. ‘My hand is so weak.’ tricks.

Doulton continued. ‘It’s a female and — saw the king of diamonds nestling in the resignedly when West’s eight of clubs ap-

this will make it easy — a former bridge dummy, not to mention three trumps. peared on the table. She would now need

partner of yours.’ Goodness me, the Matron really had no to score three diamond tricks. How did

‘Goodness me, Madame Baguette!’ ex- idea about the game. Did she not realise the suit lie? East had started with seven

claimed the Matron. ‘I hope she doesn’t that her partner must have a fabulous hearts, one spade and one club. So, she

still smoke those disgusting French hand to leap to the six-level? Why on earth held four diamonds!

cigarettes.’ should she fear a double? Madame Baguette led the two of

‘They’re no worse than my husband’s ‘Mind you, we are vulnerable,’ con- diamonds from her hand and was

pipe,’ Grace Doulton replied. ‘You can tinued the Matron. ‘It could be quite delighted to see the eight appear on her

smell that from twenty yards away. Still, expensive, even without a double.’ left. If this card was accompanied by the

no-one seems to complain about it.’ Madame Baguette ruffed the heart lead queen, jack or ten, the slam would now be

No, thought the Matron, they wouldn’t in her hand and proceeded to draw trumps made. She covered with dummy’s nine,

dare. in three rounds. She then played the ace won by East’s ten, and ruffed the heart

‘Anyway, come over to School House and king of clubs, wincing when East return. A diamond to dummy’s king

around seven o’clock and I’ve arranged a showed out on the second round. If clubs dropped West’s jack and a finesse of the

bit of supper, followed by a nice ladies had broken 3-2, she could have set up the seven of diamonds then landed the slam.

bridge four. I’ll be playing with Dolly suit and crossed to dummy with the king The Matron smiled expansively as she

Benson. You can renew your old of diamonds. It would then have been a added up the score. ‘A very successful first

partnership with Madame Baguette.’ simple matter to discard two diamond rubber for us, partner!’ she exclaimed. ‘My

The game had not been long underway losers on the long clubs. Ah well, perhaps game has improved so much since I

when this deal arrived: Grace would misdefend when a third started playing with Stefan, the young

round of clubs was played. German master.’

Game All. Dealer East. and pushed the card slightly to her left, she replaced the top of her scoring pen.

´ 854 hoping that this would encourage Grace Had the Matron played any hands so far?

™ 83 Doulton to win the trick. The Headmaster’s Her bidding was no better than when they

t K95 wife paused to assess the situation. If she used to play together and she had already

ticable that advertisements in the pages of English Bridge are bona fide, the magazine and its pub-

West North East South lisher, the EBU, cannot accept any undertaking in respect of claims made by advertisers, whether

Grace The Dolly Madame these advertisements are printed as part of the magazine, or are in the form of inserts. Legal reme-

dies are available if redress is sought, and readers who have complaints should address them to the

advertiser or should consult a local Trading Standards Office, or a Citizens’ Advice Bureau, or their

own solicitors. Readers should note that prices advertised may not be accurate due to currency