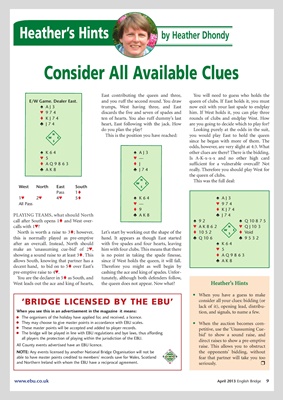 East contributing the queen and three, You will need to guess who holds the

E/W Game. Dealer East. and you ruff the second round. You draw queen of clubs. If East holds it, you must

´ AJ3 trumps, West having three, and East now exit with your last spade to endplay

™ 974 discards the five and seven of spades and him. If West holds it, you can play three

® J74 heart, East following with the jack. How are you going to decide which to play for?

do you plan the play? Looking purely at the odds in the suit,

This is the position you have reached: you would play East to hold the queen

S since he began with more of them. The

t AQ9863 t J sufficient for a vulnerable overcall? Not

® AK8 ® J74 really. Therefore you should play West for

the queen of clubs.

N This was the full deal:

after an overcall. Instead, North should with five spades and four hearts, leaving ´ K64

make an ‘unassuming cue-bid’ of 2™, him with four clubs. This means that there ™ 5

showing a sound raise to at least 3t. This is no point in taking the spade finesse, t AQ9863

allows South, knowing that partner has a since if West holds the queen, it will fall. ® AK8

decent hand, to bid on to 5t over East’s Therefore you might as well begin by

pre-emptive raise to 4™. cashing the ace and king of spades. Unfor-

You are the declarer in 5t as South, and tunately, although both defenders follow,

West leads out the ace and king of hearts, the queen does not appear. Now what? Heather’s Hints

• When you have a guess to make

‘BRIDGE LICENSED BY THE EBU’ consider all your clues: bidding (or

lack of it), opening lead, distribu-

When you see this in an advertisement in the magazine it means: tion, and signals, to name a few.

• When the auction becomes com-

petitive, use the ‘Unassuming Cue-

• The bridge will be played in line with EBU regulations and bye laws, thus affording bid’ to show a sound raise, and

all players the protection of playing within the jurisdiction of the EBU.

direct raises to show a pre-emptive

All County events advertised have an EBU licence. raise. This allows you to obstruct

NOTE: Any events licensed by another National Bridge Organisation will not be the opponents’ bidding, without

able to have master points credited to members’ records save for Wales, Scotland fear that partner will take you too

and Northern Ireland with whom the EBU have a reciprocal agreement. seriously. r