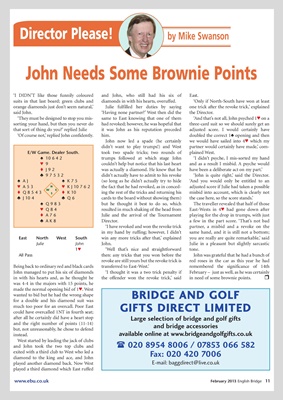 ‘I DIDN’T like those funnily coloured and John, who still had his six of East.

suits in that last board; green clubs and diamonds in with his hearts, overuffed. ‘Only if North-South have won at least

said John. ‘Having none partner?’ West then did the the Director.

‘They must be designed to stop you mis- same to East knowing that one of them ‘And that’s not all, John psyched 1™ on a

sorting your hand, but then you never do had revoked; however, he was hopeful that three-card suit so we should surely get an

that sort of thing do you?’ replied Julie it was John as his reputation preceded adjusted score. I would certainly have

‘Of course not,’ replied John confidently. him. doubled the correct 1´ opening and then

didn’t want to play trumps!) and West partner would certainly have made,’ com-

™ 9 couldn’t help but notice that his last heart and as a result I misbid. A psyche would

t J92 was actually a diamond. He knew that he have been a deliberate act on my part.’

® 97532 didn’t actually have to admit to his revoke ‘John is quite right,’ said the Director.

t Q8543 S t K 10 ing the rest of the tricks and returning his misbid into account, which is clearly not

´ Q983 but he thought it best to do so, which The traveller revealed that half of those

t A76 Julie and the arrival of the Tournament playing for the drop in trumps, with just

‘I have revoked and won the revoke trick partner, a misbid and a revoke on the

in my hand by ruffing; however, I didn’t same hand, and it is still not a bottom;

East North West South win any more tricks after that,’ explained you are really are quite remarkable,’ said

Julie John John. Julie in a pleasant but slightly sarcastic

All Pass then: any tricks that you won before the John was grateful that he had a bunch of

Being back to ordinary red and black cards transferred to East-West.’ remembered the significance of 14th

John managed to put his six of diamonds ‘I thought it was a two trick penalty if February – just as well, as he was certainly

in with his hearts and, as he thought he the offender won the revoke trick,’ said in need of some brownie points. r

made the normal opening bid of 1™. West

wanted to bid but he had the wrong shape

for a double and his diamond suit was

much too poor for an overcall. Poor East

could have overcalled 1NT in fourth seat; GIFTS DIRECT LIMITED

but, not unreasonably, he chose to defend and bridge accessories

instead. available online at www.bridgeandgolfgifts.co.uk

West started by leading the jack of clubs

exited with a third club to West who led a