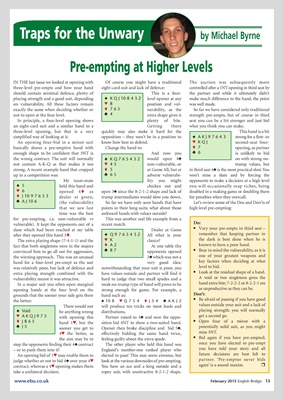 three-level pre-empts and how your hand eight-card suit and lack of defence: controlled after a 1NT opening in third seat by

should contain minimal defence, plenty of This is a four- the partner and while it ultimately didn’t

playing strength and a good suit, depending ´ K Q J 10 8 4 3 2 level opener at any make much difference to the hand, the point

on vulnerability. All these factors remain ™ 8 position and vul- was well made.

exactly the same when deciding whether or t 765 nerability, as the So far we have considered only traditional

not to open at the four level. ® 4 extra shape gives it strength pre-empts, but of course in third

In principle, a four-level opening shows plenty of bite. seat you can be a bit stronger and just bid

an eight-card suit and a similar hand to a Getting there what you think you can make.

three-level opening, but that is a very quickly may also make it hard for the This hand is a bit

simplified way of looking at it. opposition – they won’t be in a position to ´ AKJ97643 strong for a first- or

An opening four-bid in a minor suit know how best to defend. ™ KQJ second-seat four-

basically shows a pre-emptive hand with Change the hand to: t 7 opening, as partner

not contain A-K-Q as that makes it too ™ 43 non-vulnerable, or trump values, but

strong. A recent example hand that cropped t 5 at Game All, but at in third seat 4´ is the most practical shot. You

up in a competition was: ® 65 adverse vulnerabi- won’t miss a slam and by forcing the

´ 5 held this hand and chicken out and you will occasionally reap riches, being

t J 10 9 7 6 5 3 dealer at green, trump intermediates would slow you down. for penalties when they overcall.

that we saw last points in their long suits; what about those high level pre-empting:

time was the best awkward hands with values outside?

for pre-empting, i.e. non-vulnerable vs This was another real life example from a

vulnerable). It kept the opponents out of a recent match: Do:

after they opened this hand 3t. ´ Q9765432 All what is your remember that keeping partner in

fact that both singletons were in the majors t A2 At one table the known to have a poor hand.

convinced him to go all out for aggression, ® 87 opponents opened • Bear in mind the vulnerability, as it is

the winning approach. This was an unusual 3´ which was not a one of your greatest weapons and

hand for a four-level pre-empt as the suit very good idea: key factors when deciding at what

was relatively poor, but lack of defence and notwithstanding that your suit is poor, you level to bid.

extra playing strength combined with the have values outside and partner will find it • Look at the residual shape of a hand.

vulnerability meant it was attractive. hard to judge that two small spades and a A void or two singletons gives the

opening hands at the four level on the strong enough for game. For example, a as unproductive as they can be.

grounds that the sooner your side gets there hand such as: Don’t:

´ Void be anything wrong distributions. playing strength; you will normally

™ AKQJ975 with opening this Partner raised to 4´ and now the oppo- get a second go.

hand 1™, but the sition bid 4NT to show a two-suited hand. • Open four of a minor with a

sooner you get to Opener then broke discipline and bid 5´, potentially solid suit, as you might

the aim may be to feeling guilty about the extra spade. • Bid again if you have pre-empted;

– or to push them into it! England’s number-one ranked player who you have told your story and all

An opening bid of 1™ may enable them to elected to pass! This may seem extreme, but future decisions are best left to

judge whether or not to bid 4´ over your 4™ look at the various downsides of pre-empting. partner. ‘Pre-emptor never bids

contract, whereas a 4™ opening makes them You have an ace and a king outside and a again’ is a sound maxim. r