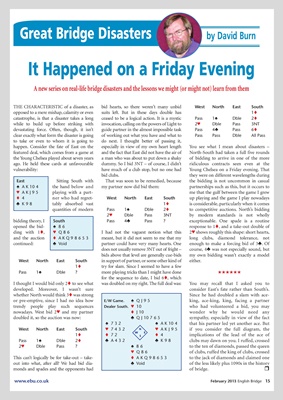 It Happened on a Friday Evening

THE CHARACTERISTIC of a disaster, as bid hearts, so there weren’t many unbid West North East South

opposed to a mere mishap, calamity or even suits left. But in these days double has 1t

catastrophe, is that a disaster takes a long ceased to be a logical action. It is a mystic Pass 1´ Dble 2t

while to build up before striking with invocation, calling on the powers of Light to 2™ Dble Pass 3NT

to take or even to whom it is going to do next. I thought better of passing it,

happen. Consider the fate of East on the especially in view of my own heart length You see what I mean about disasters –

featured deal, which comes from a game at and the fact that East did not have the air of North-South had taken a full five rounds

ago. He held these cards at unfavourable dummy. So I bid 3NT – of course, I didn’t ridiculous contracts seen even at the

vulnerability: have much of a club stop, but no one had Young Chelsea on a Friday evening. That

bid clubs. they were on different wavelengths during

East Sitting South with That was soon to be remedied, because the bidding is not uncommon in casual

´ A K 10 4 the hand below and my partner now did bid them: partnerships such as this, but it occurs to

2™ Dble Pass 3NT by modern standards is not wholly

bidding theory, I South Pass 4® Pass ? exceptionable. One spade is a routine

ding with 1t, ™ Q86 I had not the vaguest notion what this 2™ shows roughly this shape: short hearts,

and the auction t AKQ98653 meant, but it did not seem to me that my long clubs, diamond tolerance, not

continued: ® Void partner could have very many hearts. One enough to make a forcing bid of 3®. Of

does not usually remove 3NT out of fright – course, 4® was not especially sound, but

West North East South in support of partner, or some other kind of either.

1t try for slam. Since I seemed to have a few

Pass 1´ Dble ? more playing tricks than I might have done HHHHHH

for the sequence to date, I bid 6t, which

I thought I would bid only 2t to see what was doubled on my right. The full deal was: You may recall that I asked you to

developed. Moreover, I wasn’t sure consider East’s fate rather than South’s.

or pre-emptive, since I had no idea how E/W Game. ´ QJ95 king, ace-king, king, facing a partner

trendy people play such sequences Dealer South. ™ 10 who had volunteered a bid, you may

nowadays. West bid 2™ and my partner t J 10 wonder why he would need any

™ Q86 of clubs, ruffed the king of clubs, crossed

out into what, after all? We had bid dia- ® Void of the less likely plus 1090s in the history

monds and spades and the opponents had of bridge. r