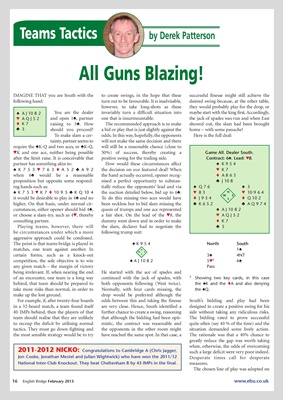 IMAGINE THAT you are South with the to create swings, in the hope that these successful finesse might still achieve the

following hand: turn out to be favourable. It is inadvisable, desired swing because, at the other table,

however, to take long-shots as these they would probably play for the drop, or

´ A J 10 8 2 You are the dealer invariably turn a difficult situation into maybe start with the king first. Accordingly,

™ AQJ52 and open 1´, partner one that is insurmountable. the jack of spades was run and when East

t K7 raising to 3´. How The recommended approach is to make showed out, the slam had been brought

® 3 should you proceed? a bid or play that is just slightly against the home – with some panache!

To make slam a cer- odds. In this way, hopefully, the opponents Here is the full deal:

tainty, partner seems to will not make the same decision and there

require the ´K-Q and two aces, or ´K-Q, will still be a reasonable chance (close to

™K and one ace, neither being possible 50%) of success, thereby creating a Game All. Dealer South.

after the limit raise. It is conceivable that positive swing for the trailing side. Contract: 6´. Lead: ™8.

partner has something akin to: How would these circumstances affect ´ K954

when 6´ would be a reasonable the hand actually occurred, opener recog- t A863

ing hands such as: tially reduce the opponents’ lead and via ´ Q76 ´ 3

higher. On that basis, under normal cir- been reckless but to bid slam missing the ® K652 ® AQ974

cumstances, either opener should bid 4´, queen of trumps and one ace represented ´ A J 10 8 2

consulting partner. dummy went down and in order to make t K7

Playing teams, however, there will the slam, declarer had to negotiate the ® 3

be circumstances under which a more following trump suit:

aggressive approach could be condoned.

matches, one team against another. In W

certain forms, such as a knock-out S

any given match – the margin of victory Pass

being irrelevant. If, when nearing the end He started with the ace of spades and

of an encounter, one team is a long way continued with the jack of spades, with 1 Showing two key cards, in this case

behind, that team should be prepared to both opponents following (West twice). the ´K and the tA and also denying

take more risks than normal, in order to Normally, with four cards missing, the the ´Q.

make up the lost ground. drop would be preferred although the

For example, if, after twenty-four boards odds between this and taking the finesse South’s bidding and play had been

in a 32-board match, a team found itself are very close. Hence, South identified a designed to create a positive swing for his

40 IMPs behind, then the players of that further chance to create a swing, reasoning side without taking any ridiculous risks.

to recoup the deficit by utilising normal mistic, the contract was reasonable and quite often (say 40 % of the time) and the

tactics. They must go down fighting and the opponents in the other room might situation demanded some lively action.

the most sensible strategy would be to try have reached the same spot. In that case, a The rationale was that a 40% chance to

greatly reduce the gap was worth taking

when, otherwise, the odds of overcoming

2011-2012 NICKO: Congratulations to Cambridge A (Chris Jagger, such a large deficit were very poor indeed.

Jon Cooke, Jonathan Mestel and Julian Wightwick) who have won the 2011/12 Desperate times call for desperate

National Inter-Club Knockout. They beat Cheltenham B by 43 IMPs in the final. measures.

The chosen line of play was adopted on