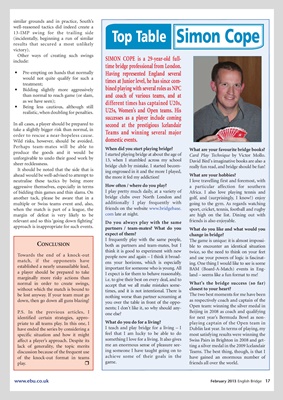 similar grounds and in practice, South’s

well-reasoned tactics did indeed create a

13-IMP swing for the trailing side

(incidentally, beginning a run of similar

results that secured a most unlikely

Other ways of creating such swings

include: SIMON COPE is a 29-year-old full-

• Pre-empting on hands that normally Having represented England several

would not quite qualify for such a

times at Junior level, he has since com-

than normal to reach game (or slam, and coach of various teams, and at

as we have seen);

• Being less cautious, although still

realistic, when doubling for penalties.

successes as a player include coming

In all cases, a player should be prepared to second at the prestigious Icelandair

take a slightly bigger risk than normal, in

order to rescue a near-hopeless cause. Teams and winning several major

Wild risks, however, should be avoided. domestic events.

Perhaps team-mates will be able to When did you start playing bridge? What are your favourite bridge books?

produce the goods and it would be I started playing bridge at about the age of Card Play Technique by Victor Mollo.

unforgivable to undo their good work by 13, when I stumbled across my school David Bird's imaginative books are also a

It should be noted that the side that is ing engrossed in it and the more I played,

ahead would be well-advised to attempt to the more it fed my addiction! What are your hobbies?

neutralise these tactics by being more I love travelling first and foremost, with

aggressive themselves, especially in terms How often / where do you play? a particular affection for southern

of bidding thin games and thin slams. On I play pretty much daily, at a variety of Africa. I also love playing tennis and

another tack, please be aware that in a bridge clubs over North London and golf, and (surprisingly, I know!) enjoy

multiple or Swiss teams event and, also, additionally I play frequently with going to the gym. As regards watching

when the match is part of a league, the friends on the website www.bridgebase. sport, cricket, tennis, football and rugby

margin of defeat is very likely to be com late at night. are high on the list. Dining out with

relevant and so this ‘going down fighting’ Do you always play with the same friends is also enjoyable.

approach is inappropriate for such events. partners / team-mates? What do you What do you like and what would you

expect of them? change in bridge?

I frequently play with the same people, The game is unique: it is almost impossi-

CONCLUSION both as partners and team-mates, but I ble to encounter an identical situation

think it is good to experiment with new twice, so the need to think on your feet

match, if the opponents have ens your horizons, which is especially ing. One thing I would like to see is some

established a nearly unassailable lead, important for someone who is young. All BAM (Board-A-Match) events in Eng-

a player should be prepared to take I expect is for them to behave reasonably, land – seems like a fun format to me!

marginally more risky actions than i.e. to give their best on every deal, and to

normal in order to create swings, accept that we all make mistakes some- What’s the bridge success (so far)

without which the match is bound to times, and it is not intentional. There is closest to your heart?

be lost anyway. If your team must go nothing worse than partner screaming at The two best moments for me have been

down, then go down all guns blazing! you over the table in front of the oppo- as respectively coach and captain of the

nents; I don't like it, so why should any- Open team: winning the silver medal in

P.S. In the previous articles, I one else? Beijing in 2008 as coach and qualifying

priate to all teams play. In this one, I What do you do for a living? playing captain of the Open team in

have ended the series by considering a I teach and play bridge for a living – I Dublin last year. In terms of playing, my

affect a player’s approach. Despite its something I love for a living. It also gives Swiss Pairs in Brighton in 2008 and get-

lack of generality, the topic merits me an enormous sense of pleasure see- ting a silver medal in the 2009 Icelandair

discussion because of the frequent use ing someone I have taught going on to Teams. The best thing, though, is that I

play. r game. friends all over the world.