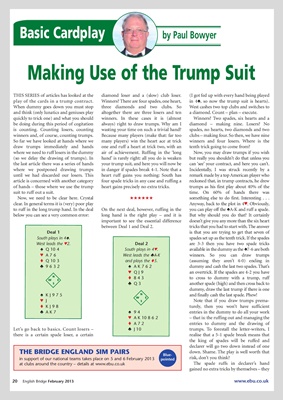 Making Use of the Trump Suit

THIS SERIES of articles has looked at the diamond loser and a (slow) club loser. (I got fed up with every hand being played

play of the cards in a trump contract. Winners? There are four spades, one heart, in 4´, so now the trump suit is hearts).

When dummy goes down you must stop three diamonds and two clubs. So West cashes two top clubs and switches to

and think (only lunatics and geniuses play altogether there are three losers and ten a diamond. Count – plan – execute.

quickly to trick one) and what you should winners. In these cases it is (almost Winners? Two spades, six hearts and a

be doing during this period of cogitation always) right to draw trumps. Why am I diamond – making nine. Losers? No

is counting. Counting losers, counting wasting your time on such a trivial hand? spades, no hearts, two diamonds and two

winners and, of course, counting trumps. Because many players (make that: far too clubs – making four. So then, we have nine

So far we have looked at hands where we many players) win the heart ace at trick winners and four losers. Where is the

draw trumps immediately and hands one and ruff a heart at trick two, with an tenth trick going to come from?

where we need to ruff losers in the dummy air of achievement. Ruffing in the ‘long Now, you may draw trumps if you wish

(so we delay the drawing of trumps). In hand’ is rarely right: all you do is weaken but really you shouldn’t do that unless you

where we postponed drawing trumps in danger if spades break 4-1. Note that a Incidentally, I was struck recently by a

until we had discarded our losers. This heart ruff gains you nothing: South has remark made by a top American player who

article is concerned with another category four spade tricks in any case and ruffing a reckoned that, in trump contracts, he drew

of hands – those where we use the trump heart gains precisely no extra tricks. trumps as his first play about 40% of the

Now, we need to be clear here. Crystal HHHHHH something else to do first. Interesting . . .

clear. In general terms it is (very) poor play Anyway, back to the plot in 4™. Obviously,

to ruff in the long trump hand. In the deal On the next deal, however, ruffing in the you can play off the ´A-K and ruff a spade.

below you can see a very common error: long hand is the right play – and it is But why should you do that? It certainly

between Deal 1 and Deal 2. tricks that you had to start with. The answer

South plays in 4´. spades set up as the tenth trick. If the spades

™ A76 West leads the ®A-K winners. So you can draw trumps

S ® Q3 another spade (high) and then cross back to

dummy, draw the last trump if there is one

™ J S Note that if you draw trumps prema-

t KJ98 turely, then you won’t have sufficient

t A72 entries to dummy and the drawing of

Let’s go back to basics. Count losers – ® J 10 trumps. To forestall the letter-writers, I

there is a certain spade loser, a certain realise that a 5-1 spade break means that

the king of spades will be ruffed and

declarer will go two down instead of one

down. Shame. The play is well worth that

in support of our national teams takes place on 5 and 6 February 2013 pointed risk, don’t you think?

at clubs around the country – details at www.ebu.co.uk The spade ruffs in declarer’s hand

gained no extra tricks by themselves – they