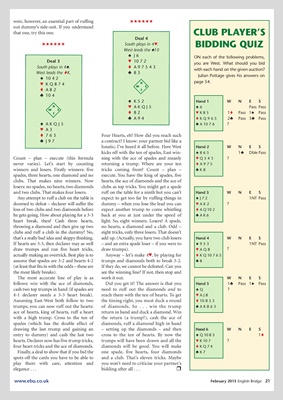 were, however, an essential part of ruffing HHHHHH

out dummy’s side-suit. If you understand

that one, try this one.

´ J6 ON each of the following problems,

Julian Pottage gives his answers on

Count – plan – execute (this formula ning with the ace of spades and meanly ™Q543 ?

never varies). Let’s start by counting returning a trump. Where are your ten tA975

spades, three hearts, one diamond and no execute. You have the king of spades, five

clubs. That makes nine winners. Now hearts, the ace of diamonds and the ace of

losers: no spades, no hearts, two diamonds clubs as top tricks. You might get a spade

and two clubs. That makes four losers. ruff on the table for a ninth but you can’t Hand 3 W N E S

doomed to defeat – declarer will suffer the dummy – when you lose the lead you can ™AK2 ?

he gets going. How about playing for a 3-3 back at you at just under the speed of ®AK6

clubs and ruff a club in the dummy? No, eight tricks, only three losers. That doesn’t

(at least that fits in with the odds – these are If they do, we cannot be defeated. Can you

the most likely breaks). see the winning line? If not, then stop and

The most accurate line of play is as work it out. W N E S

follows: win with the ace of diamonds, Did you get it? The answer is that you Hand 5 1® Pass 1´ Pass

cash two top trumps in hand (if spades are need to ruff out the diamonds and to ´Q ?

Assuming East-West both follow to two the timing right, you must duck a round t 10 8 5 3

ace of hearts, king of hearts, ruff a heart return in hand and duck a diamond. Win

with a high trump. Cross to the ten of the return (a trump?), cash the ace of

spades (which has the double effect of diamonds, ruff a diamond high in hand

hearts. Declarer now has five trump tricks, trumps will have been drawn and all the ™ K 10 7 ?

four heart tricks and the ace of diamonds. diamonds will be good. You will make tKQ74

Finally, a deal to show that if you bid the one spade, five hearts, four diamonds ®K7

spots off the cards you have to be able to and a club. That’s eleven tricks. Maybe

play them with care, attention and you won’t need to criticise your partner’s