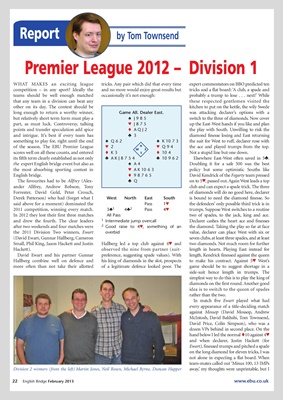 WHAT MAKES an exciting league tricks. Any pair which did that every time expert commentators on BBO predicted ten

competition – in any sport? Ideally the and no more would enjoy great results but tricks and a flat board: ‘A club, a spade and

teams should be well enough matched occasionally it’s not enough: probably a trump to lose . . . next!’ While

other on its day. The contest should be kitchen to put on the kettle, the wily Swede

long enough to return a worthy winner, Game All. Dealer East. was attacking declarer’s options with a

but relatively short term form must play a ´ J985 switch to the three of diamonds. Now cover

part, as must luck. Controversy, talking ™ J875 up the East-West hands if you like and plan

points and transfer speculation add spice t AQJ2 the play with South. Unwilling to risk the

and intrigue. It’s best if every team has ® 3 diamond finesse losing and East returning

of the season. The EBU Premier League ™ 2 N ™ Q94 the ace and played trumps from the top.

scores well on all these counts, and entered t K3 S t 10 4 Not a stupid line but one down.

The favourites had to be Allfrey (Alex- ® Q on to 5™, passed out. Again West leads a top

Forrester, David Gold, Peter Crouch, of diamonds will do no good here, declarer

Derek Patterson) who had (forget what I West North East South is bound to need the diamond finesse. So

In 2012 they lost their first three matches All Pass two of spades, to the jack, king and ace.

after two weekends and four matches were 2 Good raise to 4™, something of an the diamond. Taking the play so far at face

Small, Phil King, Jason Hackett and Justin Hallberg led a top club against 4™ and two diamonds. Not much room for further

Hackett). observed the nine from partner (suit- length in hearts. Playing East instead for

Hallberg combine well on defence and his king of diamonds in the slot, prospects to make his contract. Against 5™ West’s

more often than not take their allotted of a legitimate defence looked poor. The game should be to suggest shortage in a

side-suit hence length in trumps. The

simplest way to do this is to play the king of

diamonds on the first round. Another good

idea is to switch to the queen of spades

rather than the two.

In match five Ewart played what had

every appearance of a title-deciding match

David Price, Colin Simpson), who was a

dozen VPs behind in second place. On the

hand below I led the normal t10 against 4™

and when declarer, Justin Hackett (for

on the long diamond for eleven tricks, I was

not alone in expecting a flat board. When

Division 2 winners (from the left) Martin Jones, Neil Rosen, Michael Byrne, Duncan Happer away,’ my thoughts were unprintable, but I