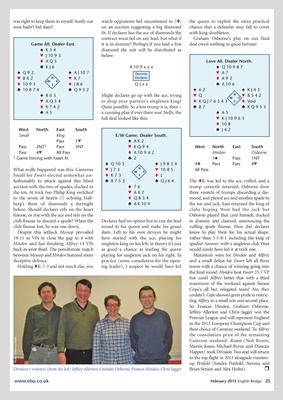 was right to keep them to myself. Surely our watch opponents bid uncontested to 7t, the queen to exploit the extra practical

men hadn’t bid slam? on an auction suggesting a big diamond chance that a defender may fail to cover

fit. If declarer has the ace of diamonds the with king-doubleton.

contract must fail on any lead, but what if Graham Osborne’s play on our final

Game All. Dealer East. it is in dummy? Perhaps if you lead a low deal owed nothing to good fortune:

´ K54 diamond the suit will be distributed as

What really happened was this. Cameron ™ J73 W E

auction with the two of spades, ducked to ´ 76 trump correctly returned. Osborne drew

the ten. At trick two Philip King switched ™ A62 three rounds of trumps discarding a dia-

to the seven of hearts (!) echoing Hall- t Q854 mond, and played ace and another spade to

berg’s three of diamonds a fortnight ® A K 10 9 the ten and jack. East returned the king of

before. Should declarer rely on the heart clubs hoping West had the jack but

finesse, or rise with the ace and rely on the Osborne played that card himself, ducked

club finesse to discard a spade? When the Declarer had no option but to run the lead in dummy and claimed, announcing the

club finesse lost, he was one down. round to his queen and make his grand ruffing spade finesse. How did declarer

Despite this setback Mossop prevailed slam. Left to his own devices he might know to play West for his actual shape,

back in joint third. The penultimate match as good a chance as leading the queen would surely have led it at trick one.

between Mossop and Hinden featured more playing for singleton jack on his right. In Maximum wins for Hinden and Allfrey

deceptive defence. practice (some consolation for the open- and a small defeat for Ewart left all three

Holding tK-7-3 and not much else, you ing leader), I suspect he would have led teams with a chance of winning going into

but could Allfrey better that with a third

maximum of the weekend against Simon

Cope’s all but relegated team? No, they

ting Allfrey to a small win and second place.

Premier League and will represent England

in the 2013 European Champions Cup and

their choice of Camrose weekend. To Allfrey

the conso lation prize of the remaining

to the top flight in 2013 alongside runners-

up Penfold (Sandra Penfold, Nevena and