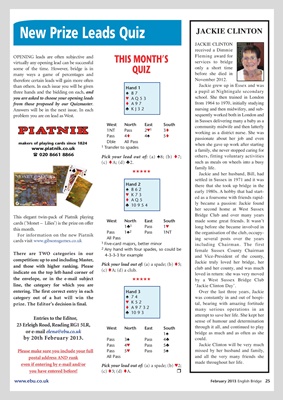 OPENING leads are often subjective and Fleming award for

some of the time. However, bridge is in

many ways a game of percentages and

QUIZ only a short time

before she died in

than others. In each issue you will be given Jackie grew up in essex and was

three hands and the bidding on each, and ´ 87 a pupil at nightingale secondary

you are asked to choose your opening leads ™ AQ53 school. She then trained in london

Answers will be in the next issue. In each ® KJ32 nursing and then midwifery, and sub-

problem you are on lead as West. sequently worked both in london and

in Sussex delivering many a baby as a

working as a district nurse. She was

passionate about her job and even

makers of playing cards since 1824 Dble All Pass

when she gave up work after starting

www.piatnik.co.uk a family, she never stopped caring for

Jackie and her husband, Bill, had

Hand 2 there that she took up bridge in the

ed as a foursome with friends rapid-

her second home at West Sussex

cards (‘Monet – Lilies’) is the prize on offer West North East South made some great friends. it wasn’t

1®1 Pass 1™ long before she became involved in

Pass 1´2 Pass 1NT the organisation of the club, occupy-

For information on the new Piatnik

All Pass ing several posts over the years

including chairman. the first

2 Any hand with four spades, so could be

There are TWO categories in our 4-3-3-3 for example and Vice-President of the county,

competition: up to and including Master,

and those with higher ranking. Please club and her county, and was much

loved in return: she was very moved

the envelope, or in the e-mail subject HHHHH by a West Sussex Bridge club

line, the category for which you are ‘Jackie clinton Day’.

entering. The first correct entry in each Hand 3 over the last three years, Jackie

t A9732 many serious operations in an

attempt to save her life. She kept her

Entries to the Editor,

sense of humour and determination

23 Erleigh Road, Reading RG1 5LR, through it all, and continued to play

or e-mail elena@ebu.co.uk 1´ bridge as much and as often as she

Pass 4™ Pass 5® Jackie clinton will be very much

Please make sure you include your full Pass 5™ Pass 5´ missed by her husband and family,

even if entering by e-mail and/or made throughout her life.