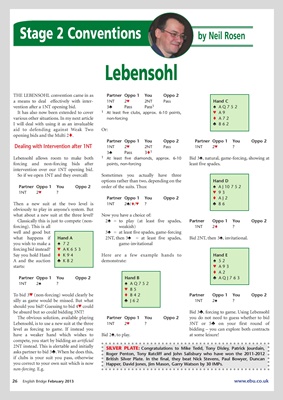 various other situations. In my next article non-forcing t A72

I will deal with using it as an invaluable ® 862

aid to defending against Weak Two Or:

opening bids and the Multi 2t.

intervention over our 1NT opening bid.

So if we open 1NT and they overcall: Sometimes you actually have three

options rather than two, depending on the Hand D

obviously to play in anyone’s system. But

what about a new suit at the three level? Now you have a choice of:

Classically this is just to compete (non- 2´ = to play (at least five spades, Partner Oppo 1 You Oppo 2

well and good but 3´ = at least five spades, game-forcing

you wish to make a ´ 72 game-invitational

should you bid? Guessing to bid 4™ could

be absurd but so could bidding 3NT! Bid 3®, forcing to game. Using Lebensohl

The obvious solution, available playing Partner Oppo 1 You Oppo 2 you do not need to guess whether to bid

level as forcing to game. If instead you bidding – you can explore both contracts

have a weaker hand which wishes to Bid 2´, to play. at some leisure!

compete, you start by bidding an artificial

asks partner to bid 3®. When he does this, Roger Penton, Tony Ratcliff and John Salisbury who have won the 2011-2012

if clubs is your suit you pass, otherwise British Silver Plate. In the final, they beat Nick Stevens, Paul Bowyer, Duncan

you correct to your own suit which is now Happer, David Jones, Jim Mason, Garry Watson by 30 IMPs.