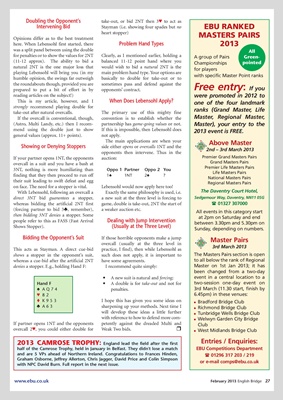 Doubling the Opponent’s take-out, or bid 2NT then 3™ to act as

Opinions differ as to the best treatment MASTERS PAIRS

was a split panel between using the double All

for penalties or to show the values for 2NT Clearly, as I mentioned earlier, holding a A group of Pairs Green-

(11-12 approx). The ability to bid a balanced 11-12 point hand where you Championships pointed

playing Lebensohl will bring you (in my main problem hand type. Your options are

humble opinion, the swings far outweigh basically to double for take-out or to

the roundabouts though, provided you are sometimes pass and defend against the

prepared to put a bit of effort in by opponents’ contract. Free entry: If you

reading articles on the subject!) were promoted in 2012 to

This is my article, however, and I When Does Lebensohl Apply? one of the four landmark

take-out after natural overcalls. The primary use of this mighty fine ranks (Grand Master, Life

If the overcall is conventional, though, convention is to establish whether the Master, Regional Master,

(Astro, Multi Landy, etc.) then I recom- partnership has game-going values or not. Master), your entry to the

mend using the double just to show If this is impossible, then Lebensohl does 2013 event is FREE.

The main applications are when your

opponents then intervene. Thus in the

3NT, nothing is more humiliating than Oppo 1 Partner Oppo 2 You

on face. The need for a stopper is vital. Lebensohl would now apply here too!

With Lebensohl, following an overcall a Exactly the same philosophy is used, i.e. The Daventry Court Hotel,

(forcing partner to bid 3®, remember), a weaker auction etc. All events in this category start

then bidding 3NT denies a stopper. Some at 2pm on Saturday and end

people refer to this as FASS (Fast Arrival Dealing with Jump Intervention between 3.30pm and 5.30pm on

Shows Stopper). (Usually at the Three Level) Sunday, depending on numbers.

overcall (usually at the three level in

This acts as Stayman. A direct cue-bid practice, I find), then while Lebensohl as

shows a stopper in the opponent’s suit, such does not apply, it is important to The Masters Pairs section is open

whereas a cue-bid after the artificial 2NT have some agreements. to all below the rank of Regional

been changed from a two-day

• A new suit is natural and forcing; event in a central location to a

® A63 sharpening up your methods. Next time I • Richmond Bridge Club

half of the Camrose Trophy, held in January in Belfast. They didn't lose a match EBU Competitions Department

with NPC David Burn. Full report in the next issue.