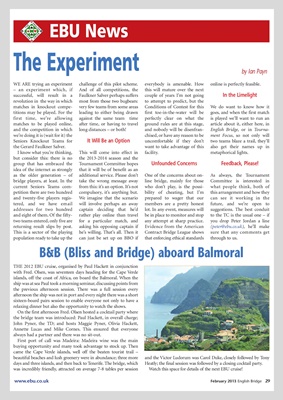 The Experiment by Ian Payn

WE ARE trying an experiment challenge of this pilot scheme. everybody is amenable. How online is perfectly feasible.

– an experiment which, if And of all competitions, the this will mature over the next

successful, will result in a Faulkner Salver perhaps suffers couple of years I’m not going In the Limelight

revolution in the way in which most from those two bugbears: to attempt to predict, but the

titions may be played. For the leading to either being drawn first toe-in-the-water will be goes, and when the first match

first time, we’re allowing against the same team time perfectly clear on what the is played we’ll want to run an

matches to be played online, after time, or having to travel ground rules are at this stage, article about it, either here, in

and the competition in which long distances – or both! and nobody will be disenfran- English Bridge, or in Tourna-

we’re doing it is (wait for it) the chised, or have any reason to be ment Focus, so not only will

Seniors Knockout Teams for It Will Be an Option uncomfortable if they don’t two teams blaze a trail, they’ll

the Gerard Faulkner Salver. want to take advantage of this also get their names up in

I know what you’re thinking, This will come into effect in facility. metaphorical lights.

as the older generation – of additional service. Please don’t One of the concerns about on- As always, the Tournament

bridge players, at least. In the take the wrong message away line bridge, mainly for those Committee is interested in

current Seniors Teams com- from this: it’s an option. It’s not who don’t play, is the possi- what people think, both of

petition there are two hundred compulsory, it’s anything but. bility of cheating, but I’m this arrangement and how they

tered, and we have email will involve perhaps an away members are a pretty honest future, and we’re open to

addresses for two hundred captain deciding that he’d lot. In any event, measures will suggestions. The best conduit

and eight of them. Of the fifty- rather play online than travel be in place to monitor and stop to the TC is the usual one – if

two teams entered, only five are for a particular match, and any attempt at sharp practice. you drop Peter Jordan a line

This is a sector of the playing he’s willing. That’s all. Then it Contract Bridge League shows sure that any com ments get

population ready to take up the can just be set up on BBO if that enforcing ethical standards through to us.

B&B (Bliss and Bridge) aboard Balmoral

THE 2012 EBU cruise, organised by Paul Hackett in conjunction

with Fred. Olsen, was seventeen days heading for the Cape Verde

islands, off the coast of Africa, on board the Balmoral. When the

ship was at sea Paul took a morning seminar, discussing points from

the previous afternoon session. There was a full session every

relaxing dinner but also the opportunity to watch the shows.

On the first afternoon Fred. Olsen hosted a cocktail party where

the bridge team was introduced: Paul Hackett, in overall charge;

Annette Lucas and Mike Cornes. This ensured that everyone

always had a partner and there was no sit-out.

First port of call was Madeira: Madeira wine was the main

buying opportunity and many took advantage to stock up. Then

beautiful beaches and lush greenery were in abundance; three more and the Victor Ludorum was Carol Duke, closely followed by Tony

days and three islands, and then back to Tenerife. The bridge, which Heatly; the final session was followed by a closing cocktail party.

was incredibly friendly, attracted on average 7-8 tables per session Watch this space for details of the next EBU cruise!