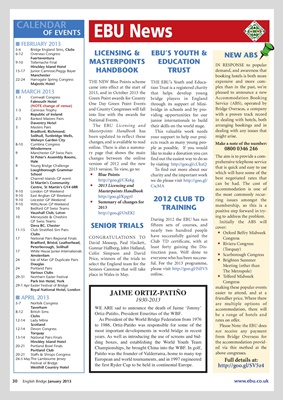 Manchester booking hotels is both more

came into effect at the start of tion Trust is a registered charity plex than in the past, we’re

One Day Green Point Events through its support of Mini- Service (ABS), operated by

1-3 Camrose Trophy and County Congresses will fall bridge in schools and by pro- Bridge Overseas, a company

2-3 Ranked Masters Pairs National Events. in dealing with hotels, both

3 Masters Pairs The EBU Licensing and their skills on the world stage. arranging bookings and in

Bradford, Richmond, Masterpoints Handbook has This valuable work needs dealing with any issues that

Solihull, Tunbridge Wells, been updated to reflect these your support to help our proj- might arise.

changes, and is available to read ects reach as many young peo- Make a note of the number:

St Peter’s Assembly Rooms, changes between the online The aim is to provide a com-

find out the easiest way to do so

version of 2012 and the new prehensive telephone service

Loughborough Grammar To find out more about our

which will have some of the

St Martin’s Community can be had. The cost of

accommodation is one of

• Summary of changes for 2012 CLUB TD ring issues amongst the

9-10 Wilts/Avon GP Weekend membership, so this is a

GP Swiss Teams During 2012 the EBU has run

Initially the ABS will

CONGRATULATIONS TO have successfully gained the • Oxford Belfry Midweek

Club TD certificate, with at

everyone who has been success- • Scarborough Congress

Price, winners of the trials to

select the England team for the ful. For the 2013 programme, • Brighton Summer

place in Wales in May. online.

JaIME OrtIz-PatIñO easier to attend, and at a

5-7 Norfolk Congress are multiple options of

Taverham We are sad to announce the death of Jaime ‘Jimmy’ accommodation, there will

Ortiz-Patiño, President emeritus of the WBF. be a range of hotels and

12-14 Lady Milne as President of the World Bridge Federation from 1976 rates on offer.

Scotland to 1986, Ortiz-Patiño was responsible for some of the Please Note: the EBU does

13-14 National Pairs Finals years. as well as introducing the use of screens and bid- from Bridge Overseas for

20-21 Portland Bowl Finals ed via this method at the

Championships, he brought China into the WBF. In golf,

20-21 Staffs & Shrops Congress Patiño was the founder of Valderrama, home to many top above congresses.

26-5 May The Lambourne Jersey european and world tournaments, and in 1997 engineered Full details at:

the first ryder Cup to be held in continental europe. http://goo.gl/SV5z4