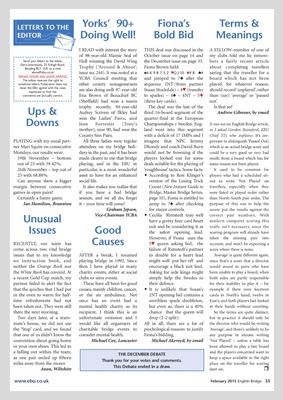 Send your letters to the editor, Hull winning the David Wing the December issue on page 33. bers a fairly recent article

(please include your postal address)

condense letters. Publication does not other county nonagenarians sequence 2NT (from partner played, for whatever reason,

mean the EBU agrees with the views

expressed or that the

(Sheffield) had won a teams (three key cards). out’.

trophy recently, 94-year-old The deal was the last of the Is that so?

Ups & Audrey Scriven of Ilkley had

won the Ladies’ Pairs, and

third 16-board segment of the

quarter-final at the European

land went into this segment

It was not an English Bridge article,

so I asked Gordon Rainsford, EBU

County Sim Pairs. with a deficit of 17 IMPs and I Chief TD, who explains: It’s im-

PLAYING with my usual part- All three ladies were regular imagine that NPC Jeremy portant to distinguish ‘Passed Out’,

Mondays, our results were: days in the past, and it has been would not be frowning if the could be a very good or very bad

19th November – bottom made clearer to me that bridge players looked out for some result, from a board which has for

out of 23 with 39.42%; playing, and in the EBU in deals suitable for the playing of some reason not been played.

26th November – top out of particular, is a most wonderful ‘roughhouse’ tactics. Some facts: It used to be common for

25 with 68.88%. asset to have for an enhanced • According to Ron Klinger’s players who had a scheduled sit-

Can anyone show a bigger social life. version of the Losing Trick out to write ‘Not Played’ on

margin between consecutive It also makes you realise that Count (New Instant Guide to travellers, especially when they

games in open pairs? if you have a bad bridge Bridge, Master Bridge Series, were listed in played order rather

Certainly a funny game. session, and we all do, forget page 10), Fiona is entitled to than North-South pair order. The

Ian Hamilton, Braunton it – your time will come! jump to 7´ after checking purpose of this was to help the

Graham Jepson, for major controls. scorer put the results against the

suit and be considering it as really isn’t necessary, since the

However, if Fiona uses the taken the missing pair into

RECENTLY, our team has Causes 5™ queen asking bid, the account, and won’t be expecting a

come across two vital bridge failure of Rimstedt’s partner score where there is none.

issues that to my knowledge AFTER a break, I resumed to double for a heart lead ‘Average’ is quite different again,

no instruction book, and playing bridge in 1992. Since might well put her off and since that’s a score that a director

neither the Orange Book nor then I have played in many encourage a black suit lead. would award to pairs who have

the White Book has covered. At charity events, either at social Asking for side kings might been unable to play a board, when

a recent Gold Cup match, my clubs or sims events. simply help the Swedes in both sides are partly responsible

partner failed to alert the fact These have all been for good their defence. for their inability to play it – for

that the quiches that I had put causes, mainly children, cancer, • It is unlikely that Susan’s example if there were fourteen

in the oven to warm for half- or the air ambulance. Not 2NT opening bid contains a cards in North’s hand, twelve in

time refreshments had not once has an event had a worthless spade doubleton, East’s, and both players had looked

been taken out. They were still mental health charity as its but even so, there is a 40% at their hands without counting.

there the next morning. recipient. I think this is an chance that the queen will So the terms are quite distinct,

Two days later, at a team- unfortunate omission and I drop (2-2 split). but in practice it should only be

mate’s house, we did not use would like all organisers of All in all, there are a lot of the director who would be writing

the ‘Stop’ card, and we found charitable bridge events to psychological reasons to justify ‘Average’, and there’s unlikely to be

that one of us didn’t know the consider mental health. Fiona’s bidding. any purpose in anyone writing

convention about going home Michael Cox, Lancaster Michael Akeroyd, by email ‘Not Played’ – unless a table has

in your own shoes. This led to been allowed to play a late board

a falling out within the team, THE DECEMBER DEBATE

and the players concerned want to

Thank you for your votes and comments.

miles away from the owner. place on the traveller for scoring

This Debate ended in a draw.