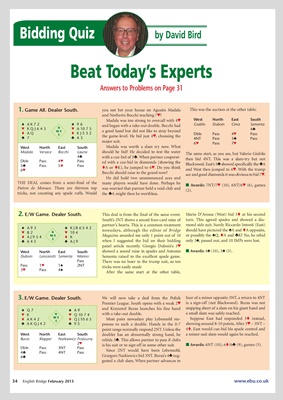 1. Game All. Dealer South. you not bet your house on Agustin Madala This was the auction at the other table:

´ AK72 ´ 96 and began with a take-out double. Bocchi had Giubilo Duboin Cima Sementa

WE a good hand but did not like to stray beyond

West North East South Madala was worth a slam try now. What

Madala Versace Bocchi Lauria should he bid? He decided to test the water The same start, as you see, but Valerio Giubilo

then bid 4NT. This was a slam-try but not

ed with a cue-bid in diamonds (showing the Blackwood. East’s 5® showed specifically the ®A

Bocchi should raise to the grand now? ace and good diamonds it was obvious to bid 7™.

He did hold two unannounced aces and

Patton de Monaco. There are thirteen top was worried that partner held a void club and (2).

tricks, not counting any spade ruffs. Would the ®A might then be worthless.

2. E/W Game. Dealer South. This deal is from the final of the same event. Mario D’Avossa (West) bid 3t at his second

South’s 2NT shows a sound four-card raise of turn. This agreed spades and showed a dia-

nowadays, although the editor of Bridge should have pictured the ´A and tA opposite,

Pass There was no loser in the trump suit, so ten

After the same start at the other table,

3. E/W Game. Dealer South. We will now take a deal from the Polish four of a minor opposite 3NT, a return to 4NT

Premier League. South opens with a weak 2™ is a sign-off (not Blackwood). Buras was not

WE Suppose East had responded 3t instead,

point range normally respond 2NT. Unless the 4t, East would cue-bid his spade control and

West North East South doubler has an abnormally strong hand, he a minor-suit slam would again be reached.

Since 2NT would have been Lebensohl,

gested a club slam. When partner advances to