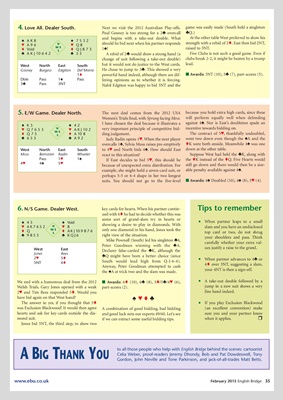 4. Love All. Dealer South. Next we visit the 2012 Australian Play-offs. game was easily made (South held a singleton

Paul Gosney is too strong for a 2® overcall ®Q.)

and begins with a take-out double. What At the other table West preferred to show his

™ Q8 should he bid next when his partner responds strength with a rebid of 2t. East then bid 2NT,

WE raised to 3NT.

change of suit following a take-out double) clubs break 2-2, it might be beaten by a trump

West North East South but it would not do justice to the West cards. lead.

Gosney Burgess Edgtton Del’Monte He chose to jump to 3®. This showed a very

Dble Pass 1´ Pass fering opinions as to whether it is forcing.

5. E/W Game. Dealer North. The next deal comes from the 2012 USA because you hold extra high cards, since these

I have chosen the deal because it illustrates a against 4´. Nor is East’s doubleton spade an

™ A K J 10 2 very important principle of competitive bid- incentive towards bidding on.

overcalls 1´, Sylvia Moss raises pre-emptively tK were both onside. Meanwhile 4´ was one

West North East South to 4™ and North bids 4´. How should East down at the other table.

Moss Bernstein Radin Wheeler react to this situation? Suppose West had held the ®K, along with

Pass 1™ 1´ If East decides to bid 5™, this should be the tK instead of the tQ. Five Hearts would

because of unexpected extra distribution. For

example, she might hold a seven-card suit, or able penalty available against 4´.

ued with 6t he had to decide whether this was

some sort of grand-slam try in hearts or

showing a desire to play in diamonds. With • When partner leaps to a small

slam and you have an undisclosed

S top card or two, do not shrug

your shoulders and pass. Think

carefully whether your extra val-

Peter Goodman winning with the ®A.

West East ues justify a raise to the grand.

Declarer false-carded the ®K, although the

4t over 3NT, suggesting a slam,

the ´A at trick two and the slam was made. your 4NT is then a sign-off.

jump in a new suit shows a very

2™ and Tim Rees responded 5t. Would you fine hand indeed.

The answer is: yes, if you thought that 5t

was Exclusion Blackwood! It would then agree

• If you play Exclusion Blackwood

hearts and ask for key-cards outside the dia- and good luck nets our experts 49/60. Let’s see sure you and your partner know

mond suit. if we can extract some useful bidding tips. when it applies. r

A BIG THANK YOU to all those people who help with English Bridge behind the scenes: cartoonist