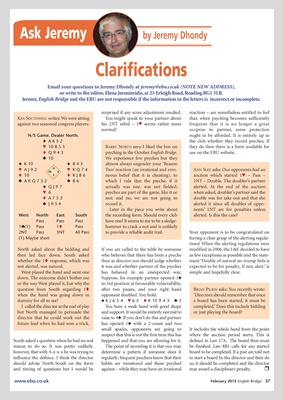 surprised if any score adjustment resulted. reaction – are nonetheless entitled to feel

KEN SOUTHWELL writes: We were sitting You might speak to your partner about that, when psyching becomes sufficiently

against two seasoned congress players: his 2NT rebid – 1™ seems rather more frequent that it is no longer a great

N/S Game. Dealer North. ought to be afforded. It is entirely up to

´ A652 the club whether they record psyches. If

t Q943 psyching in the October English Bridge. use on the EBU website.

® 10 We experience few psyches but they

™ KQ74 Two’ reaction (an irrational and erro- ANN SLEE asks: Our opponents had an

´ QJ97 actually was one, was not fielded; alerted. At the end of the auction

™ 6 psyches are part of the game, like it or when asked, doubler’s partner said the

t A752 not; and no, we are not going to double was for take-out and that she

® J954 record it. alerted it since all doubles of oppo-

West North East South the recording form. Should every club alerted. Is this the case?

Pass Pass Pass have one? It seems to me to be a sledge-

2NT Pass 3NT All Pass to provide a reliable audit trail. Your opponent is to be congratulated on

(1) Maybe short having a clear grasp of the alerting regula-

tions! When the alerting regulations were

North asked about the bidding and If you are called to the table by someone modified in 2006, the L&E decided to have

then led face down. South asked who believes that there has been a psyche as few exceptions as possible and the state-

whether the 1t response, which was then as director you should judge whether ment ‘Double of natural no-trump bids is

not alerted, was natural. it was and whether partner of the psycher expected to be for penalty. If not, alert.’ is

West played the hand and went one has behaved in an unexpected way. simple and hopefully clear.

down. The outcome didn’t bother me Suppose, for example partner opened 1´

or the way West played it, but why the in 3rd position at favourable vulnerability,

question from South regarding 1t after two passes, and your right hand BRIAN PILBIN asks: You recently wrote:

when the hand was going down in opponent doubled. You hold: ‘Directors should remember that once

I called the director at the end of play You have a weak hand with good shape completed.’ Does this include bidding

but North managed to persuade the and support. It would be entirely normal to or just playing the board?

director that he could work out the raise to 4´. If you don’t do this and partner

future lead when he had won a trick. has opened 1´ with a 2-count and two

small spades, opponents are going to It includes the whole hand from the point

suspect that this is not the first time this has where the auction period starts. This is

South asked a question when he had no real happened and that you are allowing for it. defined in Law 17A. The board then must

reason to do so. It was pretty unlikely, The point of recording it is that you may be finished. Law 8B1 calls for any started

however, that with A-x-x-x he was trying to determine a pattern if someone does it board to be completed. If a pair are told not

influence the defence. I think the director regularly; frequent psychers know that their to start a board by the director and then do

should advise North-South on the form habits are monitored and those psyched so, it should be completed and the director

and timing of questions but I would be against – while they may have an irrational may award a disciplinary penalty. r