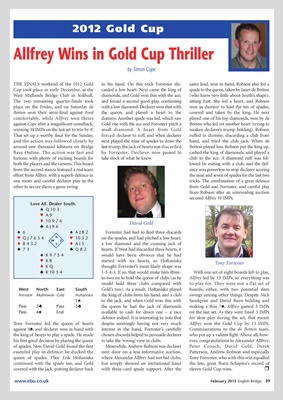 THE FINALS weekend of the 2012 Gold in his hand. On this trick Forrester dis- same lead, won in hand, Robson also led a

Cup took place in early December, at the carded a low heart. Next came the king of spade to the queen, taken by Janet de Botton

West Midlands Bridge Club in Solihull. diamonds, and Gold won this with the ace, (who knew very little about South’s shape),

The two remaining quarter-finals took and found a second good play, continuing sitting East. She led a heart, and Robson

place on the Friday, and on Saturday de with a low diamond. Declarer won that with won in dummy to lead the ten of spades,

Botton won their semi-final against Ford the queen, and played a heart to the covered and taken by the king. He next

comfortably, while Allfrey won theirs dummy. Another spade was led, which saw played one of his top diamonds, won by de

against Cope after a magnificent comeback, Gold rise with the ace and Forrester pitch a Botton who led yet another heart (trying to

winning 34 IMPs on the last set to win by 4! small diamond. A heart from Gold weaken declarer’s trump holding). Robson

That set up a worthy final for the Sunday, forced declarer to ruff, and when declarer ruffed in dummy, discarding a club from

and the action was followed closely by next played the nine of spades to draw the hand, and tried the club jack. When de

around one thousand kibitzers on Bridge last trump, the jack of hearts was discarded Botton played low, Robson put the king up,

Base Online. The action was fast and by Forrester. Declarer now paused to cashed the king of diamonds, and played a

furious, with plenty of exciting boards for take stock of what he knew. club to the ace. A diamond ruff was fol-

both the players and the viewers. This board lowed by exiting with a club, and the def-

effort from Allfrey, with a superb defence in the nine and seven of spades for the last two

one room and careful declarer play in the tricks. The combination of a great defence

other to secure them a game swing: from Gold and Forrester, and careful play

from Robson after an unrevealing auction

´ 6 ´ AJ82 Forrester had had to find three discards

to-two on to hold the queen of clubs (as he Allfrey led by 13 IMPs, so everything was

would hold three clubs compared with to play for. They were not a flat set of

Forrester Malinowski Gold Hoftaniska the king of clubs from his hand, and a club swings among other things. Despite Nick

1´ to the jack, and when Gold won this with Sandqvist and David Burn bidding and

Pass 2® Pass 3® the queen he had the jack of diamonds making a thin 7´, Allfrey gained 3 IMPs

Pass 4´ End available to cash for down one – a nice on the last set. As they were fined 3 IMPs

defence indeed. It is interesting to note that for slow play during the set, that meant

Tony Forrester led the queen of hearts despite seemingly having not very much Allfrey won the Gold Cup by 13 IMPs.

against 4´, and declarer won in hand with interest in the hand, Forrester’s carefully Commiserations to the de Botton team,

the king of hearts to play a spade. He made chosen discards helped to persuade declarer who put up a valiant fight. Above all, how-

his first good decision by playing the queen to take the ‘wrong’ view in clubs. ever, congratulations to Alexander Allfrey,

essential play in defence: he ducked the next door on a less informative auction, Patterson, Andrew Robson and especially

queen of spades. Thor Erik Hoftaniska where Alexander Allfrey had not bid clubs, Tony Forrester, who with this win equalled

continued with the spade ten, and Gold but simply showed an invitational hand the late, great Boris Schapiro’s record of

covered with the jack, putting declarer back with three-card spade support. After the eleven Gold Cup wins. r