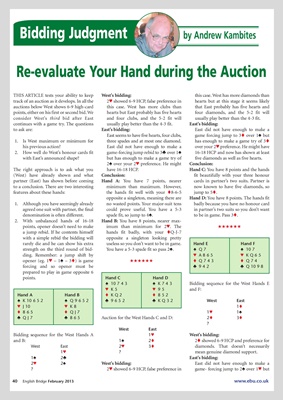 Re-evaluate Your Hand during the Auction

THIS ARTICLE tests your ability to keep West’s bidding: this case. West has more diamonds than

track of an auction as it develops. In all the 2™ showed 6-9 HCP, false preference in hearts but at this stage it seems likely

auctions below West shows 6-9 high-card this case. West has more clubs than that East probably has five hearts and

points, either on his first or second bid. We hearts but East probably has five hearts four diamonds, and the 5-2 fit will

consider West’s third bid after East and four clubs, and the 5-2 fit will usually play better than the 4-3 fit.

continues with a game try. The questions usually play better than the 4-3 fit. East’s bidding:

to ask are: East’s bidding: East did not have enough to make a

East seems to have five hearts, four clubs, game forcing jump to 3t over 1´ but

1. Is West maximum or minimum for three spades and at most one diamond. has enough to make a game try of 3t

his previous action? East did not have enough to make a over your 2™ preference. He might have

with East’s announced shape? but has enough to make a game try of five diamonds as well as five hearts.

The right approach is to ask what you have 16-18 HCP. Hand C: You have 8 points and the hands

(West) have already shown and what Conclusion: fit beautifully with your three honour

partner (East) has shown before coming Hand A: You have 7 points, nearer cards in partner’s two suits. Partner is

to a conclusion. There are two interesting minimum than maximum. However, now known to have five diamonds, so

features about these hands: the hands fit well with your t8-6-5 jump to 5t.

opposite a singleton, meaning there are Hand D: You have 8 points. The hands fit

1. Although you have seemingly already no wasted points. Your major-suit tens badly because you have no honour card

agreed one suit with partner, the final could prove useful. You have a 5-3 in partner’s two suits so you don’t want

denomination is often different. spade fit, so jump to 4´. to be in game. Pass 3t.

points, opener doesn’t need to make imum than minimum for 2™. The HHHHHH

a jump rebid. If he contents himself hands fit badly, with your tQ-J-7

rarely die and he can show his extra useless so you don’t want to be in game. Hand E Hand F

prepared to play in game opposite 6

Bidding sequence for the West Hands A 1™ West’s bidding: