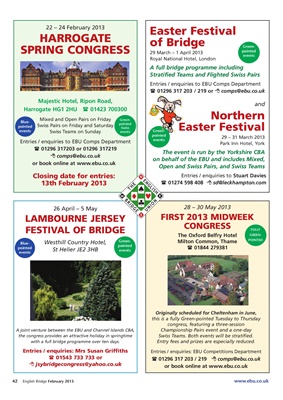 A full bridge programme including

The event is run by the Yorkshire CBA

on behalf of the EBU and includes Mixed,

or book online at www.ebu.co.uk

Originally scheduled for Cheltenham in June,

this is a fully Green-pointed Tuesday to Thursday

A joint venture between the EBU and Channel Islands CBA, Championship Pairs event and a one-day

the congress provides an attractive holiday in springtime Swiss Teams. Both events will be stratified.

with a full bridge programme over ten days. Entry fees and prizes are especially reduced.