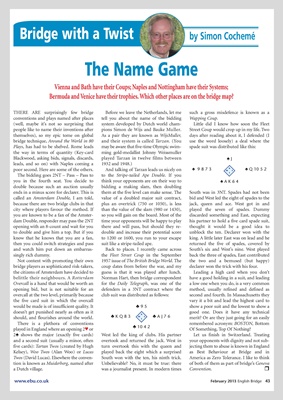 Vienna and Bath have their Coups; Naples and Nottingham have their Systems;

Bermuda and Venice have their trophies. Which other places are on the bridge map?

THERE ARE surprisingly few bridge Before we leave the Netherlands, let me such a gross misdefence is known as a

conventions and plays named after places tell you about the name of the bidding Wapping Coup.

(well, maybe it’s not so surprising that system developed by Dutch world cham- Little did I know how soon the Fleet

people like to name their inventions after pions Simon de Wijs and Bauke Muller. Street Coup would crop up in my life. Two

themselves), so my epic tome on global As a pair they are known as WijsMuller, days after reading about it, I defended (I

bridge technique, Around the World in 80 and their system is called Tarzan. (You use the word loosely) a deal where the

Plays, has had to be shelved. Rome leads may be aware that five-time Olympic swim- spade suit was distributed like this:

poor second. Here are some of the others. And talking of Tarzan leads us nicely on ´ 9873 W

The bidding goes 2NT – Pass – Pass to to the Stripe-tailed Ape Double. If you

you in the fourth seat. You decide to think your opponents are on their way to ´AK64

double because such an auction usually bidding a making slam, then doubling

ends in a minus score for declarer. This is them at the five level can make sense. The South was in 3NT. Spades had not been

called an Amsterdam Double, I am told, value of a doubled major suit contract, bid and West led the eight of spades to the

because there are two bridge clubs in that plus an overtrick (750 or 1050), is less jack, queen and ace. West got in and

city where players favour the method. If than the value of the slam (980 or 1430), played the seven of spades. Dummy

you are known to be a fan of the Amster- so you will gain on the board. Most of the discarded something and East, expecting

dam Double, responder may pass the 2NT time your opponents will be happy to play his partner to hold a five card spade suit,

opening with an 8-count and wait for you there and will pass, but should they re- thought it would be a good idea to

to double and give him a top. But if you double and increase their potential score unblock the ten. Declarer won with the

then you could switch strategies and pass suit like a stripe-tailed ape. returned the five of spades, covered by

and watch him put down an embarras- Back to places. I recently came across South’s six and West’s nine. West played

singly rich dummy. the Fleet Street Coup in the September back the three of spades, East contributed

Not content with promoting their own 1957 issue of The British Bridge World. The the two and a bemused (but happy)

bridge players as sophisticated risk-takers, coup dates from before the war, and my declarer won the trick with his four.

the citizens of Amsterdam have decided to guess is that it was played after lunch. Leading a high card when you don’t

belittle their neighbours. A Rotterdam Norman Hart, then bridge correspondent have a good holding in a suit, and leading

Overcall is a hand that would be worth an for the Daily Telegraph, was one of the a low one when you do, is a very common

opening bid, but is not suitable for an defenders in a 3NT contract where the method, usually refined and defined as

overcall at the two level, primarily because club suit was distributed as follows: second and fourth. In Massachusetts they

would be made is of insufficient quality. It ®95 show a poor suit and the lowest to show a

doesn’t get punished nearly as often as it N

good one. Does it have any technical

should, and flourishes around the world. ®KQ83 W

E ®AJ76 merit? Or are they just going for an easily

There is a plethora of conventions remembered acronym: BOSTON, Bottom

played in England where an opening 2™ or Of Something, Top Of Nothing?

2´ shows the major (exactly five cards) West led the king of clubs. His partner Let us finish in Switzerland. Treating

and a second suit (usually a minor, often overtook and returned the jack. West in your opponents with dignity and not sub-

five cards): Tartan Twos (created by Hugh turn overtook this with the queen and jecting them to abuse is known in England

Kelsey), Woo Twos (Alan Woo) or Lucas played back the eight which a surprised as Best Behaviour at Bridge and in

Twos (David Lucas). Elsewhere the conven- South won with the ten, his ninth trick. America as Zero Tolerance. I like to think

tion is known as Muiderberg, named after Unbelievable? No, it must be true: there of both of them as part of bridge’s Geneva

a Dutch village. was a journalist present. In modern times Convention. r