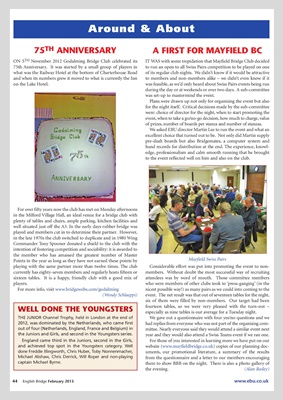 75TH ANNIVERSARY A FIRST FOR MAYFIELD BC

75th Anniversary. It was started by a small group of players in to run an open to all Swiss Pairs competition to be played on one

what was the Railway Hotel at the bottom of Charterhouse Road of its regular club nights. We didn’t know if it would be attractive

on the Lake Hotel. was feasible, as we’d only heard about Swiss Pairs events being run

during the day or at weekends or over two days. A sub-committee

was set-up to mastermind the event.

for the night itself. Critical decisions made by the sub-committee

were: choice of director for the night, when to start promoting the

event, when to take a go/no-go decision, how much to charge, value

of prizes, number of boards per stanza and number of stanzas.

excellent choice that turned out to be. Not only did Martin supply

hand records for distribution at the end. The experience, knowl-

edge, professionalism and calm smooth running that he brought

to the event reflected well on him and also on the club.

in the Milford Village Hall, an ideal venue for a bridge club with

plenty of tables and chairs, ample parking, kitchen facilities and

well situated just off the A3. In the early days rubber bridge was

played and members cut in to determine their partner. However,

Commander Tony Spooner donated a shield to the club with the

intention of fostering competition and sociability: it is awarded to

the member who has amassed the greatest number of Master

playing with the same partner more than twelve times. The club Considerable effort was put into promoting the event to non-

currently has eighty-seven members and regularly hosts fifteen or members. Without doubt the most successful way of recruiting

sixteen tables. It is a happy, friendly club with a good mix of attendees was by word of mouth. Those committee members

players. who were members of other clubs took to ‘press-ganging’ (in the

For more info, visit www.bridgewebs.com/godalming nicest possible way!) as many pairs as we could into coming to the

(Wendy Schlaeppi) event. The net result was that out of seventeen tables for the night,

six of them were filled by non-members. Our target had been

fourteen tables, so we were very pleased with the turn-out –

WELL DONE THE YOUNGSTERS especially as nine tables is our average for a Tuesday night.

THE JUNIOR Channel Trophy, held in London at the end of We gave out a questionnaire with four yes/no questions and we

2012, was dominated by the Netherlands, who came first had replies from everyone who was not part of the organising com-

out of four (Netherlands, England, France and Belgium) in mittee. Nearly everyone said they would attend a similar event next

the Juniors and Girls, and second in the Youngsters series. year and they would also attend a Swiss Teams event if we ran one.

England came third in the Juniors, second in the Girls, For those of you interested in learning more we have put on our

and achieved top spot in the Youngsters category. Well website (www.mayfieldbridge.co.uk) copies of our planning doc-

Michael Alishaw, Chris Derrick, Will Roper and non-playing from the questionnaire and a letter to our members encouraging

captain Michael Byrne. them to show BBB on the night. There is also a photo gallery of