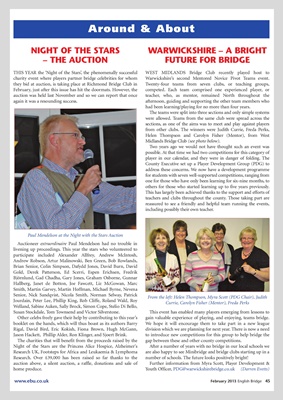 NIGHT OF THE STARS WARWICKSHIRE – A BRIGHT

– THE AUCTION FUTURE FOR BRIDGE

THIS YEAR the ‘Night of the Stars’, the phenomenally successful WEST MIDLANDS Bridge Club recently played host to

they bid at auction, is taking place at Richmond Bridge Club in Twenty-four teams from seven clubs, or teaching groups,

February, just after this issue has hit the doormats. However, the competed. Each team comprised one experienced player, or

auction was held last November and so we can report that once teacher, who, as mentor, remained North throughout the

again it was a resounding success. afternoon, guiding and supporting the other team members who

had been learning/playing for no more than four years.

The teams were split into three sections and only simple systems

were allowed. Teams from the same club were spread across the

sections, as one of the aims was to meet and play against players

from other clubs. The winners were Judith Currie, Freda Perks,

possible. At that time we had two competitions for this category of

player in our calendar, and they were in danger of folding. The

County Executive set up a Player Development Group (PDG) to

address these concerns. We now have a development programme

for students with seven well-supported competitions, ranging from

one for those who have only been learning for six-nine months, to

others for those who started learning up to five years previously.

teachers and clubs throughout the county. Those taking part are

reassured to see a friendly and helpful team running the events,

including possibly their own teacher.

Paul Mendelson at the Night with the Stars Auction

Auctioneer extraordinaire Paul Mendelson had no trouble in

livening up proceedings. This year the stars who volunteered to

Susan Stockdale, Tom Townsend and Victor Silverstone. This event has enabled many players emerging from lessons to

Other celebs freely gave their help by contributing to this year’s gain valuable experience of playing, and enjoying, teams bridge.

booklet on the hands, which will thus boast as its authors Barry We hope it will encourage them to take part in a new league

Rigal, David Bird, Eric Kokish, Fiona Brown, Hugh McGann, division which we are planning for next year. There is now a need

Jason Hackett, Phillip Alder, Ron Klinger, and Sjoert Brink. to introduce new competitions for this group to help bridge the

The charities that will benefit from the proceeds raised by the gap between these and other county competitions.

Night of the Stars are the Princess Alice Hospice, Alzheimer's After a number of years with no bridge in our local schools we

Research UK, Footsteps for Africa and Leukaemia & Lymphoma are also happy to see Minibridge and bridge clubs starting up in a

Research. Over £39,000 has been raised so far thanks to the number of schools. The future looks positively bright!

auction above, a silent auction, a raffle, donations and sale of Further information from Myra Scott, Player Development &