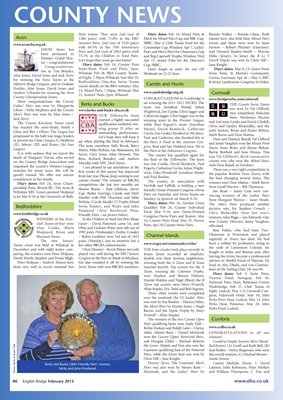 Avon 1286 pairs) with 71.8% in the EBU Flitch for Mixed Pairs Cup and BBL Cup, islands have also held their Mixed Pairs

www.avoncba.org.uk Autumn Pairs, 2nd (out of 1029 pairs) SBBC. Mar 3, Club Teams Final for the events and these were won by Susie

73.1% in the Children in Need Pairs. and Reg Capewell Trophy, Windsor. Wed Miles (Jersey). In Jersey the B Le V

Let’s hope they soon go one better! Apr 17, Senior Pairs for the Director’s Durell Trophy was won by Chris Hill –

too to Tim Brierley,

for winning the Swiss Teams at the

Malvern Bridge Congress, and to Graham

(more details on the BBA website). Mar Cambs and Hunts

Andrew Urbanski for winning the Avon

More congratulations: the County on winning the 2011-2012 NICKO. The

team was Jonathan Mestel, Julian was won by Val Clifford,

OUR Tollemache team Catherine Jagger. Chris Jagger was in the

enjoyed a highly successful winning team in the Premier League,

has reached the semi-finals: Smith v Chris and Sandra Bickerdike, and the

at present are Glass (League I), Stephens Dave and Dommy Boxall, Val Clifford

up when playing the final in February. the Pairs A Final at the Autumn Con-

It is with sadness that we report the Barrie Benfield and June Fitness. This

Rees, Richard Bowdery and Andrew the final of the Tollemache. The team

on the County Bridge Association and county win (she won the Mixed Pairs,

organised the county’s Western League with Dave Boxall, in October).

I am pleased to say attendance at the Fegarty, Catherine Curtis, Julian Wight-

matches for many years. She will be There was a very tight competition in

greatly missed. We offer our sincere the popular Bodmin Swiss Teams, with

from last year. Please, keep coming to our and Paul Barden.

condolences to her family. the lead changing several times. The

county events! The winners of BBCBA The county, in association with

competitions the last two months are Norfolk and Suffolk, is holding a new

Cup, Butler Scoring), Carole and Herb Pairs on Saturday and Swiss Teams on

is on Mar 9-10 at the University of Bath. vincing winners of the Ladies’ Pairs

Mueller with Phil Thornton and Mike Sunday) in Ipswich on March 9-10. from Margaret Warner – Janet Heath.

Alan Cooke, Maris Olive and Graham Watts were 6th out of

Ron Fisher, who had been Vice-

regularly at Truro, has died. He had

The new Seniors’ pairs, (Monday), just to mention but a

www.cwgsy.net/community/cicba/ been a soldier by profession, rising to

Teams event was held at Wilstead in few other BBCBA achievements.

December and with eight teams com- Chris Mooney – Kevin Elstow not only the rank of Lieutenant Colonel. He

THE Inter-insular took place recently in

peting, the winners were Peter Malpass, played very well during the EBU Seniors fought in India and Burma and, after

Derek Marsh, Stephen and Penny Bligh. Congress in the Pairs to finish in 8th place, leaving the Army, became a professional

double over their Sarnian neighbours,

Peter Malpass – Andrew Mason have but also rounded it off by winning the advisor to Sheikh Faisal of Sharjah. He

winning both the A Team and B Team

matches heavily. Top scorers for the A

were Stephen and Sharon Halston,

Harold Walden and Nigel Elliott; the B

Three other events were completed

over the weekend; the CI Ladies’ Pairs

Bacon, and the Sigma Trophy by Mary

The winners of the two County Open Cumbria

Alder. Alistair Kent – Daniel McIntosh CONGRATULATIONS to all our

the Lower. Alistair and Dan also won the fied Event): (A) Geoff and Kath Bell, (B)

Guernsey qualifying heat of the National Jean Ridley – Sylvia Rogerson, who were

Pairs, while the Jersey heat was won by the overall winners, (C) Michael Brewer –

McIntosh, and the Ladies’ Pairs by and William Thompson; 2. Tim and