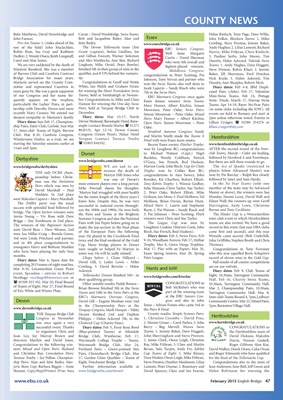 Marjorie Bamford. She was a member finished 5th in their group of nine in the Middlesex Congress: Steve Preston, Robin Khan; 2. Jeremy

years gone by. She was a great supporter for winning the Heart Foundation Swiss 7th in the Swiss Pairs. cated Pairs (clubs). Feb 17, Valentine

of our Congress and her name fre- Teams, held at Smithaleigh in Novem- EBU Marmaris Congress: once again Mini-Swiss Teams. Feb 24, Pottage

nership with Dorothy Heron and more Pairs, held at Torquay Bridge Club in Moorman, Peter Oake; Swiss Pairs: (in some clubs including the IOW). All

recently Mary Cooney. We extend our December. Simon Moorman – Peter Oake; Mixed events are held in Romsey and start at

Windermere Hydro; as a trial, we are Torquay (contact Terence Treeby Herefordshire

11am and 3pm. won by Loughton BC; congratulations AFTER the second round of the Inter-

www.bridgewebs/derbyshire WE are sad to an - Marion Cook, John Birch. Cup for Clubs The Ace of Spades (restricted to

nounce the death of Trophy: won by Collier Row BC; players below Advanced Master) was

THE only DCBA cham-

was one of Dorset’s Rowden, Kit Charlton, Robert Elliott. followed by Janet and Sam Hardy.

mas was the Invitation

most eminent players over a long period. Tony Kelvin Trophy: 1. Winnie Godber, In the No Fear Teams (only one

Pairs which was won by

‘Martyn had struggled with poor health 2. Peter Oake, Robert Elliott, Mike Master or above), the winners were Sue

knew him. Despite this, he was very Mollison, Brian Davies, Bernie Hunt. Eileen Wall; the runners-up were Geoff

The EMBA party was the usual

success with splendid food followed by

bridge. The Open Section winners were

the Pairs and Teams at the Brighton 3. Pat Johnson – Peter Scotting. Flitch The Healey Cup is a Worcestershire

Summer Congress and also the National winners were Chris and Sue Taylor. inter-club event to which Herefordshire

Pairs with Jim Pepin before going on to The League Cup was won by teams are also invited. We have a good

The winners of the Beginners Section

of the European Pairs the following Birch, Sue French, Rod Hudson). came first and second), and this year

3rd were Linda Pritchard and partner,

and in 4th place congratulations to

were taught or helped by Martyn in Congratulations to Tony Forrester

who have been playing for only four Essex Spring Seniors. Mar 28, Spring

some way. He will be sadly missed.’ who this year equalled Boris Schapiro’s

of Teams of Eight. Mar 27, Final Round Brian Browse finished 5th in the Swiss Bob McRobert who was Mar 2, Championship Pairs, 10.30am,

of Eric White and Winter Plate. Teams and 10th in the Swiss Pairs at the part of the winning team Tarrington Community Hall. Mar 8,

in the Championship Pairs at the Jones – Adrian Fontes who came 3rd in 7pm, Bartestree Village Hall.