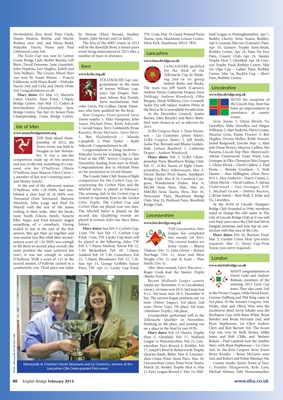 Rodney were 2nd, and Maria Budd, The first of the MBU events in 2013 Mote Park, Maidstone ME15 7RN. Apr 9, Leicester Mercury (Learners) Pairs.

Malcolm Harris, Fiona and Paul will be the Rawcliffe Bowl, a mixed-pairs Apr 10, Gimson Trophy Semi-finals,

Littlewood came 3rd. event being reintroduced in 2013 after a Rothley Centre. Apr 24, Yates No Fear

The Eccles Cup was won by Leyton number of years in abeyance.

for the final of the 1st, Olga Cup – Ladies’ Pairs, Rothley

gratulations to the team behind Berks and Bucks.

3rd. Congratulations to all. of Jeremy Willans (cap- The team was Jeff Smith (Captain), Lincolnshire

Jackie Pye will replace Andrew Petrie in the Lincoln Imp, there has

the final as he is unavailable for selection. been an improvement in

Bridge Centre. Tue Apr 16, Senior Pairs son, who have qualified for the final.

At the December Council, Austin attendance at county

ford were chosen to act as selectors for Swiss Teams: 1. Glynn Elwick, Vic

Teams event, was held in Ashcroft. Congratulations to all.

ber. It was a one-day Malcolm Lewis for winning the A Pairs

and was, in the end, something of a run- November, leading from start to finish.

away win for O’Sullivan (Marie Congratulations also to Michael Prior

and Shirley Lynch). competition for the Corbett Cup, in -

O’Sullivan, with +28 IMPs, had esta- Mitchell Salver, is played in February.

Bridge Club. At the AGM of Lincoln (Eastgate)

Weerd) with the rest of the teams Corbett Plate are played over two days.

trailing in their wake. After the break, The Mitchell Salver is played on the

voted to change the club name to The

www.leicsbridge.org.uk over forty years since the Club had left its

something of a comeback. Having below).

Eastgate premises, and now has no con-

trailed in last at the end of the first Diary dates: Sun Feb 3, Corbett Cup, THE Leicestershire Pairs nection with that area of the City.

session, they got their act together and 11am TW. Sun Feb 17, Corbett Cup League has completed Diary dates: Feb 10, Bainton Final.

session score of +26 IMPs was enough be played at the following clubs: TW The current leaders are required). Mar 17, Davey Cup-Pivot

Roger Cook lead the Stanley Trophy MANY congratulations to

Tollemache Qualifier in November, Ransley and Brian McGuire 2nd, and

on a place in the final by just 4VPs. Clery and Ken Barnett 3rd. The Sussex