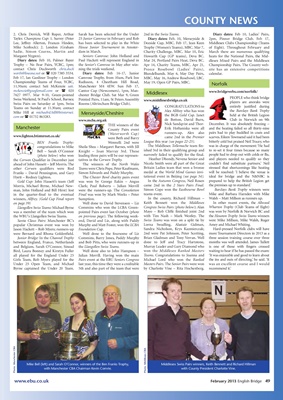 2. Chris Derrick, Will Roper, Arthur Sarah has been selected for the Under 2nd in the Swiss Teams. Diary dates: Feb 10, Ladies’ Pairs,

www.middlesexbridge.co.uk players are anoraks were

Teams on Sunday at 11.30am; contact CONGRATULATIONS to entirely justified during

Mike Hill at michaelrd.hill@btinternet. Alex Allfrey who has won the Barclays Bank Trophy

THE winners of the Nick Sandqvist and Thor- December. It was absolutely freezing –

(Waterworth Cup) runners-up. Alex also pairs had to play huddled in coats and

www.lighton.btinternet.co.uk/ came 2nd in the Premier scarves. Eileen Townsend said it had been

were Beth and Barry

congratulations to Mike Sheila Shea – Margaret Barnes, with Jill The Middlesex Tollemache team fin- was in charge of the movement: ‘He had

Bell – Sarah O’Connor Knight – Joan Marray 3rd. These ished 3rd in their qualifying group and to re-set it four times because so many

(photo below) who won leading three pairs will be our represen- narrowly failed to qualify for the final. people had to drop out with colds or flu,

the Corwen Qualifier in December just tatives in the Corwen Trophy. Heather Dhondy, Nevena Senior and and players needed to qualify so they

ahead of John Hassett – Jeff Morris. The The winners of the North Wales Nicola Smith were all part of the Great couldn’t find substitute partners.’ Neil

other Corwen qualifiers were Rod Teams were Chris Pope, Peter Kaufmann, Britain Ladies team that won a bronze stressed that shortcomings like heating

Franks – David Pennington, and Gary Simon Edwards and Paddy Murphy. medal at the World Mind Games invi- will be resolved: ‘I believe the venue is

in the quarter-final to the eventual Final was won by Mark Weeks – Peter teams event. Mike and Barbara Harnden with Mike

on page 39) Well done to David Stevenson – Liz Keith Bennett won the Middlesex In other recent events, the Allwood

were Bernard and Rhona Goldenfield. Well done to the foursome of Liz 2nd were Pat Johnson, Peter Scotting, more Tournament Directors in 2013 as a

between England, France, Netherlands and Bob Pitts, who were runners-up in done to Jeff and Tracy Hartstone, months was well attended. James Tullett

and Belgium, Sarah O’Connor, Sinead the Llangollen Swiss Teams. Murray Leader and Gary Diamond who is one of those with fingers crossed

Bird, Laura Bonney and Kirstyn Fuller Well done also to John Hampson – won the Middlesex Ranked Masters waiting to hear if he has passed the exam:

all played for the England Under 25 Julian Merrill. Having won the main Teams. Congratulations to Joanna and ‘It was enjoyable and good to learn about

Girls Team, Rob Myers played for the Pairs event at the EBU Seniors Congress Michael Lord who won the Ranked the ins and outs of directing,’ he said. ‘It

Under 25 Open Team, and Michael last year, this time they were a creditable Masters Pairs. The Senior Pairs were won was an excellent course and I would

Byrne captained the Under 20 Team. 5th and also part of the team that were by Charlotte Vine – Rita Hochenberg. recommend it.’