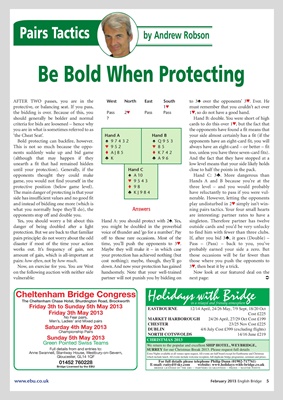 Be Bold When Protecting

AFTER TWO passes, you are in the West North East South to 3´ over the opponents’ 3™. Ever. He

protective, or balancing seat. If you pass, 1™ must remember that you couldn’t act over

the bidding is over. Because of this, you Pass 2™ Pass Pass 1™, so do not have a good hand.

should generally be bolder and normal ? Hand B: double. You were short of high

criteria for bids are loosened – hence why cards to do this over 1™, but the fact that

‘the Cheat Seat’. Hand A Hand B your side almost certainly has a fit (if the

nents suddenly wake up and bid game t AJ85 t K742 too, unless you have three seven-card fits).

until your protection). Generally, if the Hand C close to half the points in the pack.

opponents thought they could make ´ A 10 Hand C: 3®. More dangerous than

game, you would not find yourself in the ™ 9543 Hands A and B because you’re at the

protective position (below game level). t 98 three level – and you would probably

side has insufficient values and no good fit nerable. However, letting the opponents

what you normally hope they’ll do), the Answers ning pairs tactics. Your four small hearts

opponents stop off and double you. are interesting: partner rates to have a

Yes, you should worry a bit about this Hand A: you should protect with 2´. Yes, singleton. Therefore partner has twelve

protection. But we are back to that familiar voice of thunder and ‘go for a number’. Pay to find him with fewer than three clubs.

pairs principle: do not worry about the odd off to those rare occasions. Most of the If, after you bid 3®, it goes (Double) –

disaster if most of the time your action time, you’ll push the opponents to 3™. Pass – (Pass) – back to you, you’ve

works out. It’s frequency of gain, not Maybe they will make it – in which case probably earned your side a zero. But

amount of gain, which is all-important at your protection has achieved nothing (but those occasions will be far fewer than

pairs: how often, not by how much. cost nothing); maybe, though, they’ll go those where you push the opponents to

Now, an exercise for you. You are West down. And now your protection has gained 3™, then beat it by a trick.

on the following auction with neither side handsomely. Note that your well-trained Now look at our featured deal on the

vulnerable: partner will not punish you by bidding on next page: ‹

in a relaxed and friendly atmosphere