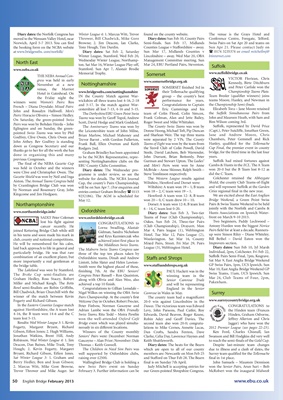 Diary dates: the Norfolk Congress has Winter League 4: 1. Marcus Witt, Trevor found on the county website. The venue is the Grays Hotel and

November at a new Nottinghamshire

SOMERSET finished 3rd in and Peter Carlisle won the

Hotel in Gateshead. On

the Friday night the

and 3-17. In the match against Wor- Congratulations to Captain the Championship Semi-finals.

Teams was won by Geoff Topol, Andrew Frank Colman, Alan and Jette Bailey, John and Maureen Heath, with Sam and

On Saturday, the green-pointed Swiss

Eglington and on Sunday, the green-

Trevor Barret , with Gordon Fullerton, were separated by 2 VPs. The County

Frank Ball, Ellen Overton and Keith Teams of Eight was won by the team from

down as Congress Secretary and our Cup Final, the premier event in county

thanks go to her for all the work she has bridge, for the third time in the last four

done in organising this and many years.

previous Congresses. Gurman and Stewart Upton. The Ladies’ Suffolk had mixed fortunes against

senting Nottinghamshire clubs on the

The final of the NEBA Gazette Cup and Men’s Pairs were won by Anne Cambs & Hunts in the ECL. The A Team

was held in October and the winners McBride – Anne Skinner, Ralph Smith – won 20-0 but the B Team lost 8-12 as

were Clive and Christopher Owen. The Steve Tomlinson respectively. did the C Team.

gramme is under review, so see the

by Cramlington Bridge Club was won will be on Sun Apr 7. (For enquiries and Wiltshire: A team won 19 – 1, B team and will represent Suffolk at the Garden

in his teens and soon made his mark in Hotel. Tue Mar 12, Pairs League (2), up were Simon Riley – Diane Whiteley.

and Krys Kazmierczak who

He will be remembered for his calm, Mixed Pairs, Street. Fri Mar 29, Pairs Improvers section.

three of the top ten places taken by

Smith were the highest placed of these,

finishing 7th. At the EBU Seniors’ PAUL Hackett was in the

along with Olivia and Alan Woo, also Senior Camrose Trials

achieved a top 10 finish. and will be representing

Bowl semi-finalists are Robin Griffiths, Congratulations to Gillian Lonsdale – England in the Senior

Bill Chadwick, Brian Churchill with the Nigel Wilkes on winning the OBA Swiss Camrose in Wales in May. Surrey

winner of the match between Kevin Pairs Championship. At the county’s first The county team had a magnificent

Fogarty and Richard Gibson. Welcome Day in October, Robert Procter, 20-0 win against Lincolnshire in the www.surreycountybridge.org.uk

In the Eastern Counties League match Peter Finbow, Norman Gascoyne and Dawes. The victorious team was Edward CONGRATULATIONS to

Hough; 2. Kevin Fogarty, Margaret The Children in Need Sim Pairs was which are open to all of our county due to illness and a clash of dates, the