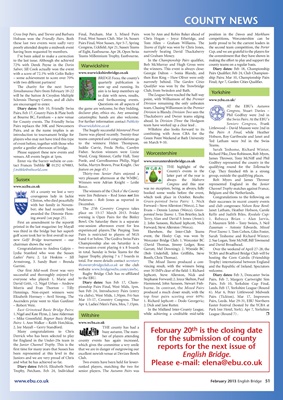 Cross Imp Pairs, and Trevor and Barbara Final, Patcham. Mar 3, Mixed Pairs won by Ann and Robin Baker ahead of position in the Dawes and Markham

having been requested by members. of Eight, Eastbourne. Apr 28, Open Swiss narrowly beating David Thackaberry Cup, and we are grateful to the players for

I’ve been asked to make a correction Teams Millennium Trophy, Eastbourne. and Graham Moxey. the commitment that they have shown in

to the last issue. Although she achieved In the Championship Pairs qualifier, making the effort to play and support the

72% with Derek Payne in the Dorin Warwickshire Bob McMurray and Hugh Gross were county teams on a regular basis.

– some achievement to score over 70% BRIDGE Focus, the county’s then Ron King – Huw Oliver were only ship Pairs; Mar 10, Championship Pairs

The charity for the next Surrey now up and running. Its Qualifier was won by the Trowbridge

Simultaneous Pairs from February 18-22 aim is to keep members up Club, from Swindon and Bath.

The Leagues have reached the half-way

will be the Sutton & Croydon Multiple to date with news, results,

Sclerosis Therapy Centre, and all clubs and forthcoming events. point, with Williamson of the Premier www.ycba.co.uk/

are encouraged to enter. Questions on all aspects of Division remaining the only unbeaten

team. Chasing Williamson in the Premier AT the EBU’s Autumn

Diary dates: Feb 10, Friendly Swiss the game are welcome, be they bidding,

Thackaberry and Dwyer teams edging Phil Godfrey were 2nd in

at Bourne BC, Farnham – a new venue catastrophic hands are also welcome.

ahead. In Division Three the Hodgson the Swiss Pairs. At the EBU’s

Pairs, and as the name implies is an The hugely successful Mentored Pivot

combining with Avon CBA for the the Pairs A Final, while Heather

introduction to tournament bridge for Teams was played recently. Twenty-four

of event before, together with those who to the winners: Helen Thompson,

Enter via the Surrey website or con- Poole, and Carrolleannea Philip, Nigel www.worcestershirebridge.co.uk Godfrey represented the county in the

tact Frances Trebble ( 01252 679883, Seifas, Martyn Brawn, Prue Knight. (See THE highlight of the qualifying round for the Tollemache

f.trebble@ntlworld.com feature on page 45.) County’s events in the Cup. They finished 4th in a strong

Thirty-two Senior Pairs enjoyed a latter part of the year is group, outside the qualifying places.

very pleasant afternoon at the WMBC.

Congress and this year represented England in the Junior

www.sccba.co.uk Reece. was no exception, being, as always, fully Channel Trophy matches against France,

AS a county we lost a very The winners of the Chick o’ the County booked some weeks before the event, Belgium and the Netherlands.

courageous lady in Jackie were Jim Pedersen – Rod Jones not Jim which took place in October. Results: Congratulations to the following on

First an amendment to the reportπ Bowl. On Saturday there is a separate 2. John Sansom, Richard Jephcott, Nick 2. Maureen Tebb – Tony Swiers, 3. Neil

golf score took her to first overall in our Pairs is restricted to players of NGS event, the Healey Cup, was won by Sarah Teshome and Richard Winter;

Congratulations to Andrea Galpin – two-session event playing 6 x 8 boards Garratt, Mel Downing); 2. Wyeside BC Over the weekend of April 27-28, the

Lydia Stanford who won the Sussex in total. Sunday is Swiss Teams for the (Bob Underhill, John Griffiths, Steve YCBA and Bradford Bridge Club will be

Garrini. @coventrybridgeclub.co.uk or the club vincing result, with the winners being and the Republic of Ireland. Spectators

Our first Mid-week Event was very website www.bridgewebs.com/cnwbc. over 30 IMPs clear of the field: 1. Richard welcome.

2. Joy Mayall – Gerry Standford. THE county has had a

Many congratulations to Chris busy autumn. The num- February 20th is the closing date

Derrick who has been selected to play ber of players attending

for England in the Under-20s team in county events has again increased, for the submission of county

the Junior Channel Trophy. This is the which gives the committee a wry smile

been represented at this level in the

Juniors and we are very proud of Chris

and what he has achieved so far.

Two events have been held for lower-

ranked players, matching the two for