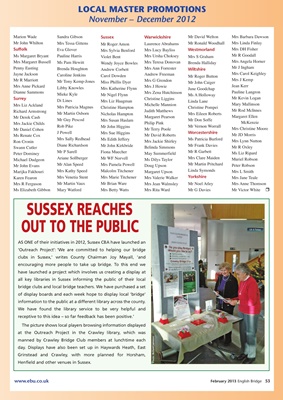 OUT TO THE PUBLIC

AS ONE of their initiatives in 2012, Sussex CBA have launched an

‘Outreach Project’: ‘We are committed to helping our bridge

encouraging more people to take up bridge. To this end we

have launched a project which involves us creating a display at

all key libraries in Sussex informing the public of their local

bridge clubs and local bridge teachers. We have purchased a set

of display boards and each week hope to display local ‘bridge’

information to the public at a different library across the county.

We have found the library service to be very helpful and

receptive to this idea – so far feedback has been positive.’

at the Outreach Project in the Crawley library, which was

manned by Crawley Bridge Club members at lunchtime each

day. Displays have also been set up in Haywards Heath, East

Grinstead and Crawley, with more planned for Horsham,

Henfield and other venues in Sussex.