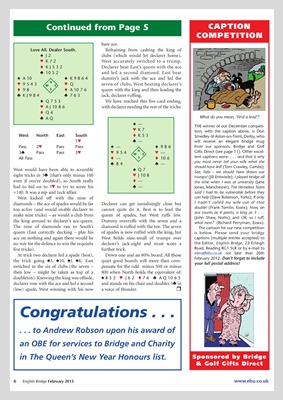 Love All. Dealer South. Refraining from cashing the king of

´ Q753 We have reached this five-card ending,

´ — THE winner of our December competi-

™ K7 tion, with the caption above, is Don

1™ ® — will receive an elegant bridge mug

you must never tell your wife what she

should have led! (Tom Crawley, Cambs);

West would have been able to scramble ´ Q7

See, Fido – we should have drawn our

even if you’re doubled), so South really t — the time when I was at university (Jane

had to bid on to 3™ to try to score his ® — Jones, Manchester); The Homeless Team

+140. It was a nip and tuck affair. said I had to be vulnerable before they

West kicked off with the nine of can help (Dave Robinson, Yorks); If only

too active (and would enable declarer to cannot quite do it. Best is to lead the

make nine tricks) – as would a club from queen of spades, but West ruffs low.

the king around to declarer’s ace-queen. Dummy overruffs with the seven and a what next? (Richard Perryman, Essex).

The nine of diamonds ran to South’s diamond is ruffed with the ten. The seven The cartoon for our new competition

queen (East correctly ducking – play his of spades is now ruffed with the king, but is below. Please send your bridgy

no way for the defence to win the requisite declarer’s jack-eight and must score a the Editor, English Bridge, 23 Erleigh

At trick two declarer led a spade (best), Down one and an 80% board. All those elena@ebu.co.uk not later than 20th

February 2012. Don’t forget to include

then low – might be taken as top of a 800 when North holds the equivalent of:

(low) spade, West winning with his now a voice of thunder. r

. . . to Andrew Robson upon his award of

an OBE for services to Bridge and Charity

in The Queen’s New Year Honours list. Sponsored by Bridge