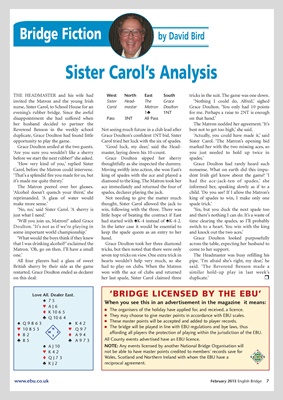 THE HEADMASTER and his wife had West North East South tricks in the suit. The game was one down.

invited the Matron and the young Irish Sister Head- The Grace ‘Nothing I could do, Alfred,’ sighed

nurse, Sister Carol, to School House for an Carol master Matron Doulton Grace Doulton. ‘You only had 10 points

evening’s rubber bridge. Since the awful 1® 1NT for me. Perhaps a raise to 2NT is enough

disappointment she had suffered when Pass 3NT All Pass on that hand.’

her husband decided to partner the The Matron nodded her agreement. ‘It's

Reverend Benson in the weekly school Not seeing much future in a club lead after best not to get too high,’ she said.

duplicate, Grace Doulton had found little Grace Doulton’s confident 1NT bid, Sister ‘Actually, you could have made it,’ said

opportunity to play the game. Carol tried her luck with the six of spades. Sister Carol. ‘The Matron’s opening bid

Grace Doulton smiled at the two guests. ‘Good luck, my dear,’ said the Head- marked her with the two missing aces, so

‘Are you sure you wouldn’t like a sherry master, laying down his 10-count. you just needed to hold up twice in

before we start the next rubber?’ she asked. Grace Doulton sipped her sherry spades.’

‘How very kind of you,’ replied Sister thoughtfully as she inspected the dummy. Grace Doulton had rarely heard such

Carol, before the Matron could intervene. Moving swiftly into action, she won East’s nonsense. What on earth did this impu-

‘That’s a splendid fire you made for us, but king of spades with the ace and played a dent Irish girl know about the game? ‘I

it’s made me quite thirsty.’ diamond to the king. The Matron took her had the ace-jack-ten of spades,’ she

The Matron peered over her glasses. ace immediately and returned the four of informed her, speaking slowly as if to a

‘Alcohol doesn’t quench your thirst,’ she spades, declarer playing the jack. child. ‘Do you see? If I allow the Matron’s

reprimanded. ‘A glass of water would Not needing to give the matter much king of spades to win, I make only one

‘No, no,’ said Sister Carol. ‘A sherry is win, following with the three. There was ‘Yes, but you duck the next spade too

just what I need.’ little hope of beating the contract if East and there’s nothing I can do. It’s a waste of

‘Will you join us, Matron?’ asked Grace had started with ´K-4 instead of ´K-4-2. time clearing the spades, so I’ll probably

Doulton. ‘It’s not as if we’re playing in In the latter case it would be essential to switch to a heart. You win with the king

some important world championship.’ keep the spade queen as an entry to her and knock out the two aces.’

‘What would the boys think if they knew hand. Grace Doulton looked purposefully

that I was drinking alcohol?’ exclaimed the Grace Doulton took her three diamond across the table, expecting her husband to

Matron. ‘Oh, go on then. I’ll have a small tricks, but then noted that there were only come to her support.

one.’ seven top tricks on view. One extra trick in The Headmaster was busy refilling his

All four players had a glass of sweet hearts wouldn’t help very much, so she pipe. ‘I’m afraid she’s right, my dear,’ he

British sherry by their side as the game had to play on clubs. When the Matron said. ‘The Reverend Benson made a

restarted. Grace Doulton ended as declarer won with the ace of clubs and returned similar hold-up play in last week’s

Love All. Dealer East. ‘BRIDGE LICENSED BY THE EBU’

´ 75 When you see this in an advertisement in the magazine it means:

t K 10 6 5 • The organisers of the holiday have applied for, and received, a licence.

® Q 10 6 4 • They may choose to give master points in accordance with EBU scales.

´ A J 10 NOTE: Any events licensed by another National Bridge Organisation will

t QJ73 Wales, Scotland and Northern Ireland with whom the EBU have a